Lionsgate and Saban Films will release Rob Zombie's new film, "3 From Hell", in nearly 900 theaters on September 16, 17 and 18, 2019 through Fathom's Digital Broadcast Network. Fathom Events will broadcast the unrated version to theaters with each night featuring unique bonus content.

On September 16, moviegoers will see a special video introduction from Rob Zombie with the first 50 attendees at each theater receiving an exclusive poster (while supplies last). On September 17, audiences will be treated to a nearly 30-minute behind-the-scenes look at the making of the film. On September 18, moviegoers will experience the ultimate double feature including "3 From Hell" and "The Devil's Rejects".

"In 2003 a bold new cinematic voice emerged with 'House Of 1,000 Corpses'," added Jonathan Saba, Saban Films' senior vice president of distribution of sales and marketing. "And with the sequel, 'The Devil's Rejects', Rob Zombie cemented his legacy as one of the most influential and important modern-day genre filmmakers. Now nearly 15 years later, Rob returns to the Firefly family in an audacious and wholly singular new chapter in this gory saga. I can't wait for audiences to see this film on the big screen thanks to our partners at Lionsgate and Fathom."

Sheri Moon reprises the role of Baby, Bill Moseley is back in his role as Otis Driftwood and Sid Haig is returning as the iconic Captain Spaulding. Jeff Daniel Phillips will play Warden Virgil Dallas Harper. Along with the promise of bizarre cameos, the eclectic cast will include legends like Danny Trejo ("Machete"),Clint Howard ("Solo: A Star Wars Story"),Richard Brake ("Batman Begins"),Dee Wallace ("The Howling") and Austin Stoker ("Assault On Precinct 13").

Tickets for "3 From Hell" can be purchased beginning Friday, July 19 at www.FathomEvents.com and participating theater box offices. A complete list of theater locations will be available July 19 at the Fathom Events web site (theaters and participants are subject to change).

Zombie will also have a new LP out later this year, his first since 2016. 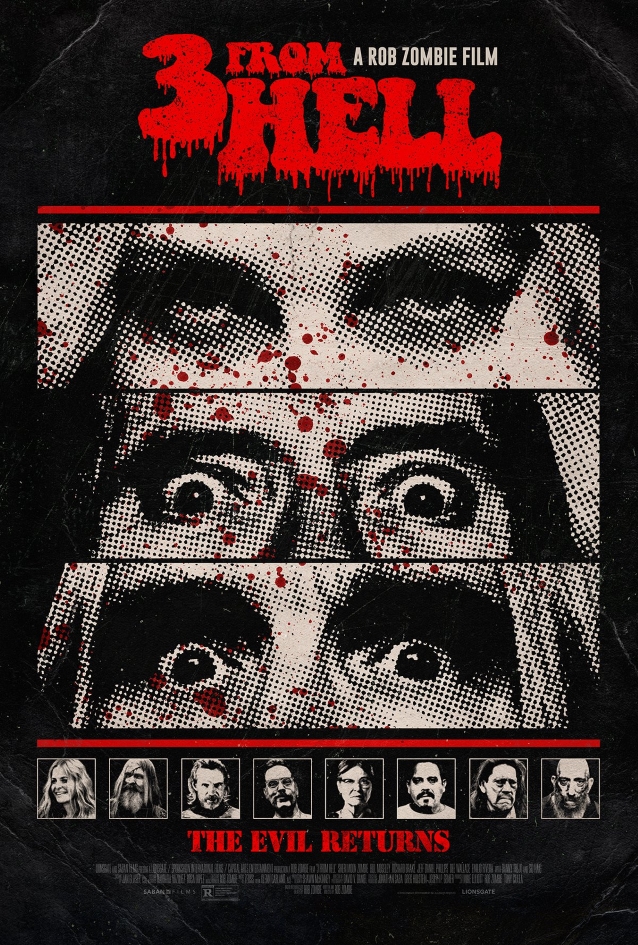