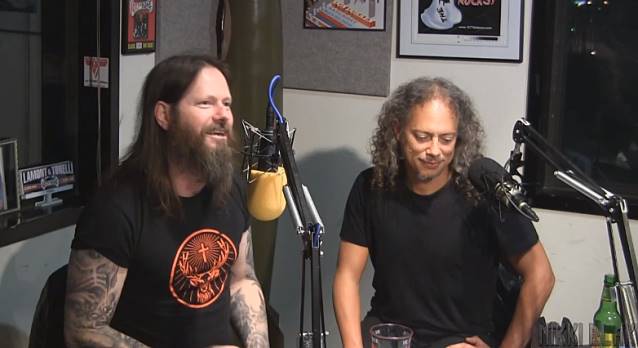 On January 30, EXODUS/SLAYER guitarist Gary Holt and METALLICA's Kirk Hammett were interviewed by "Metal Zone" host Nikki Blakk of the San Francisco, California radio station 107.7 The Bone. You can now watch the chat below.

In addition to hosting the convention, Hammett will join EXODUS and DEATH ANGEL for their encores.

Asked about the progress of the recording sessions for the new EXODUS album, Holt said: "We're not recording yet; we're writing.

"I've been finding my way through songwriting and trying to not drive myself insane. And I've found a good common ground.

"It's so heavy, people are gonna poop themselves.

"But I've been working non-stop on it, and myself and Tom [Hunting, drums] have been jamming pretty much daily on it."

After Blakk brought up the possibility of Hammett making a guest appearance on the next EXODUS CD, Hammett said "What a great idea!" and added that was "totally down" for laying down a lead on the record.

Hammett was a member of EXODUS' original lineup before replacing Dave Mustaine in METALLICA in 1983. In fact, Hammett was not only the person who came up with the EXODUS name, but also the first from the band to meet original EXODUS singer Paul Baloff and brought him into the group.