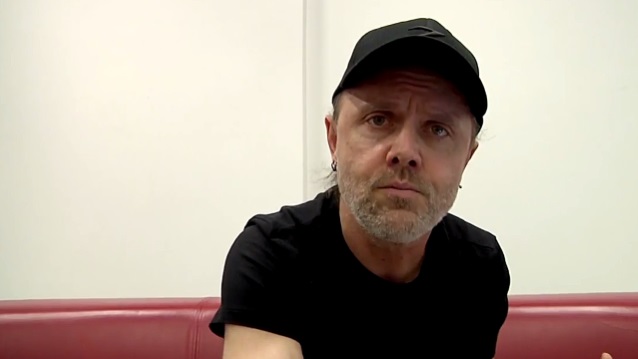 METALLICA has confirmed that it will perform at "The Night Before", a concert event set to take place the night before Super Bowl 50, on Saturday, February 6, 2016 at AT&T Park, home of the San Francisco Giants.

During an appearance on yesterday's (Monday, November 2) edition of the "Lamont And Tonelli Show", which airs on the Bay Area rock station 107.7 The Bone, METALLICA drummer Lars Ulrich stated about the upcoming event (see video below): "It's sort of part of the [Super Bowl] weekend. This is year three now. They have a show called 'The Night Before'. A couple of years ago, it started in New York with [RED HOT] CHILI PEPPERS playing. Last year, they had a bunch of country acts in Arizona. And this year — drum roll, please — it's your hometown boys METALLICA."

Ulrich also spoke about the significance of playing next year's Super Bowl for him and his bandmates, who have called the San Francisco Bay Area home for more than three decades. He said: "Obviously, it's Super Bowl 50, and it's all the Bay Area. And METALLICA is very proud and honored… I don't wanna sound too corny, but, obviously, it's gonna be a big week for all of us — whether you're in radio or rock and roll or whatever — so having all the hoopla in town for a whole week is gonna be a lot of fun, and the fact that we were asked to be part of that is, obviously, a huge honor. And playing at home, in our backyard, is obviously always a cool thing. But it's gonna be a bit of an extra-special one this year."

METALLICA has played at AT&T Park the last three years by hosting the annual "Metallica Night" at San Francisco Giants games. Earlier this year, the band expanded that tradition, bringing "Metallica Night" into the South Bay for a San Jose Sharks hockey game.

"We've done three years in a row now with the Giants, and it's an awesome thing to be a part of," Ulrich said. "And we've made a lot of great new friends there and relationships. And we did the thing with the Sharks last year, and I think we're gonna do it again this year."

He continued: "We proudly fly the flag of all things San Francisco and Bay Area, not just, obviously, at home, but all over the world. The Bay Area is a really special to live. It's not New York and it's not L.A., and we champion everything that is up here. But it's also a small-enough community that you kind of feel that you know everybody. People in New York and L.A. are so transient; people kind of come and go. Up here, people root more. And it's just such a vibe. And, obviously, there's great things happening in tech, and new faces and stuff. But, you know, listen, we're 34 years METALLICA, 32 years proudly Bay Area based, and we're just getting started."

METALLICA fans will have access to "The Night Before" tickets first through a fan club pre-sale, while general ticket sales begin on Friday (November 6) at 10:00 a.m. PT through Ticketmaster.

METALLICA will be joined at the event by CAGE THE ELEPHANT, who will also perform.

METALLICA has been working on a new album, but there is no word if any new music will be aired at the performance.

Speaking of which, METALLICA has uploaded a new video greeting from Ulrich welcoming the band's fans to its newly redesigned official web site.

The four-minute video includes a short snippet of guitarist/vocalist James Hetfield in the studio at the band's headquarters in San Rafael, California, laying down guitars on what appears to be a new METALLICA song.

Lead guitarist Kirk Hammett confirmed last week that the band was in the process of recording new material, saying, "At this point, we're still just doing basic backing tracks. James is doing his guitar stuff, and I am just kind of waiting patiently to go in there and do all of my guitar stuff."

The last METALLICA album, "Death Magnetic", came out in 2008.