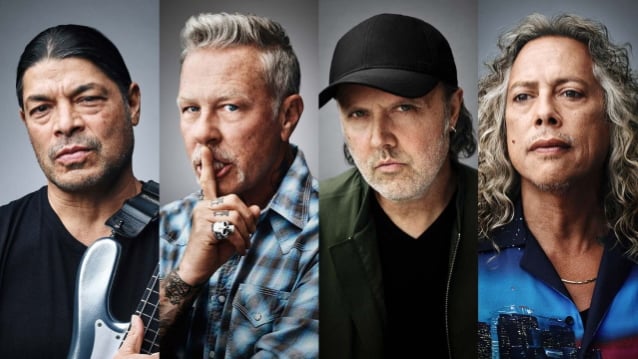 The title track of METALLICA's "Master Of Puppets" album has made its U.K. Top 40 debut, 36 years after the song's original release.

"Master Of Puppets" has jumped to No. 22 on this week's Official Singles Chart, becoming the metal legends' first U.K. Top 40 in 14 years; their last being 2008's "The Day That Never Comes".

"Master Of Puppets" is also seeing new life in the U.S. after its inclusion in season four of Netflix's hit series "Stranger Things". The popularity of the 1986 song brought it to the Billboard Hot 100 chart for the first time ever in the band's lengthy career.

Two weeks ago, METALLICA bassist Robert Trujillo revealed that his 17-year-old son Tye contributed "additional guitar tracks" to the version of "Master Of Puppets" which appears in "Stranger Things".

Apparently as a result of the renewed attention "Master Of Puppets" has received thanks to being featured in Netflix's hit original series, the song is currently sitting at position No. 23 on Spotify's Top 50 Global chart.

.@Metallica's Master of Puppets is a Top 40 hit nearly 40 years after its release 🙌 https://t.co/O3lumaCUUc