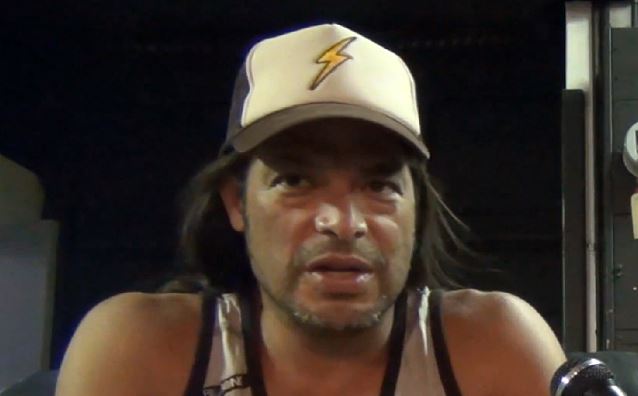 METALLICA's ROBERT TRUJILLO On Next Album: 'We're Gonna Get Back To The Drawing Board'

Argentinean rock journalist Lucas H. Gordon, who currently resides in Hollywood, California, recently conducted an interview with METALLICA bassist Robert Trujillo. You can now watch the second part of the chat below.

Asked about the progress of the songwriting sessions for METALLICA's follow-up to 2008's "Death Magnetic", Trujillo said: "We're working, we're writing. We've been writing for a couple of years. We were focused on writing a couple of years ago, and then we had a 3D movie called 'Through The Never', which came out, so that kinda detoured us [along with] a couple of other things. We did some shows this past summer. But mid-September, very soon here, we're gonna get back to the drawing board and continue to jam and write and prepare new music for the universe. It's very exciting."

METALLICA drummer Lars Ulrich told Metal Hammer in an interview that "Lords Of Summer" went over well with fans hearing it live on the band's "By Request" tour. Ulrich explained, "It's fun to play. It seems like the kids are enjoying it. There was actually somebody in the 'Snake Pit' the other day with a homemade 'Lords Of Summer' T-shirt on, which was very endearing."

Ulrich added, "It's a good song. Hey, listen, who knows by the time the next record comes out whether it will be in its same shape or format. But it's fun to play. And I think it's going down well, from what I can tell, from my little spot."

Ulrich said that in the past when the band has played fresh material live, sometimes the songs have not even had finished lyrics or titles. But he remarked that "Lords Of Summer" is "a little further along in terms of it being, sort of, together, so we're quite comfortable playing it. It's kind of written for this tour."

Frontman James Hetfield said something very similar when The Pulse Of Radio asked him a while back about the status of the band's new material. "We've come up with enough material for a record, for sure," he said. "We've gone through maybe one-tenth of the material that's on our riff CDs, but we've got enough for an album. We just haven't had the time to really focus on it and dial in and start whittling at these masterpieces, hopefully."