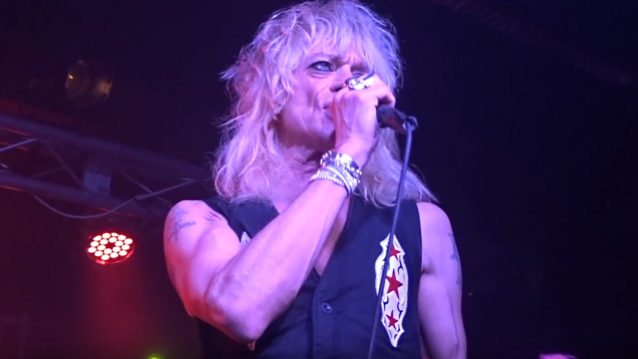 MICHAEL MONROE: Official Documentary To Be Released In 2022

During an appearance on the latest episode of the "In The Trenches With Ryan Roxie" podcast, former HANOI ROCKS singer Michael Monroe discussed the status of the long-in-the-works documentary about his life. He said (see video below): "There was somebody who started making it some years ago, but it wasn't working out with the person, so I'm now making it — someone else started making it, and they really know their business. So we started on it at the end of the summer, and it's gonna be a really good movie. But we're gonna take our time with it. We're aiming at releasing it in a couple of years when I turn 60 — in 2022.

"It's not gonna be a list of things I've done," Michael clarified. "It's gonna be more like… There's a movie about Diego Maradona, the football player, and [Ayrton] Senna, the [Brazilian] Formula [One racing] driver — they were great movies. And that's the idea for this movie. It's a great story, and you can only tell it once. The director has a great vision. We're not gonna rush it. At the latest, [we'll release it] in 2022. It could be a good celebration when I'm gonna turn 60, 'cause I'm 58 now."

Monroe's latest solo album, "One Man Gang", was released in October 2019 via Silver Lining Music. Recorded and mixed by Petri Majuri at E-Studio in Sipoo, Finland over three weeks in March 2018, the 12-song record was mixed that following autumn with Monroe and bandmates Rich Jones and Steve Conte on production duties.

The Monroe band's all-star lineup features former HANOI ROCKS and NEW YORK DOLLS bass player Sami Yaffa, who has played with Michael since the '80s, and drummer Karl Rockfist (who has played with notable acts such as DANZIG). On guitar are Rich Jones (formerly of the Ginger Wildheart band) and Steve Conte (best known as the guitarist who filled the void left by Johnny Thunders in the NEW YORK DOLLS, as well as playing guitar with many other name acts such as Suzi Quatro, Eric Burden and many more).