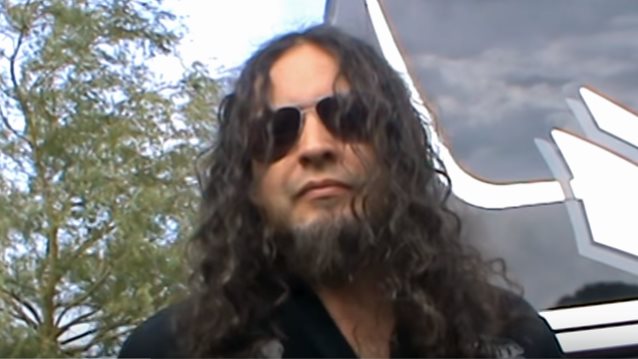 MICHAEL WILTON: 'The Real Creativity Was Stifled' In Previous Version Of QUEENSRŸCHE

FOK! conducted an interview with QUEENSRŸCHE guitarist Michael Wilton on September 3 at the CityRock festival in Leeuwarden, The Netherlands. You can now watch the chat below. A couple of excerpts follow (transcribed by BLABBERMOUTH.NET).

On choosing the setlist:

Michael: "It's a balance to appease the casual QUEENSRŸCHE fan versus the hardcore QUEENSRŸCHE fan; they want to hear the hits. Those are [from] the first six or seven albums. We infuse that with a couple of songs from our last album, 'Condition Hüman', and the [2013] self-titled album whenever possible. On a regular QUEENSRŸCHE show, we represent eight albums.

"We listen to a lot of the fans on social media, Facebook. Obviously, it's the favorites we know that work well, that we know we're going to get a good reaction out of. Then it's the hits and throwing in some obscurities just to balance it out, then a couple of new songs that we're promoting. Everybody's got their opinion and eventually we come up with a list. It's easier said than done. Our discography goes over 30 years. That's a lot of albums to choose which tunes to play."

On why QUEENSRŸCHE didn't work with [longtime producer] James Barton on their 2015 album "Condition Hüman":

Michael: "A lot of it was scheduling. The body of music, we felt that Zeuss [Chris Harris], he had a grasp of the music. He had a direction of how he wanted to get the best performances out of the guys. He was ready and willing and just had the better grasp of the demos. It was great working with him and meeting with him. He's a first-class producer/engineer; has a great set of ears, and is a young guy."

Michael: "In the earlier [version] of QUEENSRŸCHE, some of the songs weren't used. The decision was made to bring in other songwriters. The real creativity was stifled. We have a hard drive — all of us do — of songs that weren't used for those recordings. If we want, we can pull from those songs. But, the chemistry of the dynamic of the band is really great now, so it's always better to come with fresh ideas and start from a clean slate. But, if we need to, we will pull things from past demos."

On the band's career highlights:

Michael: "So many of them. Obviously, getting started with 'Queen Of The Reich'. Our demo got put into Kerrang! magazine. I was 20 years old. Then we just progressively with each album started discovering ourselves and the creativity in the band. In the late '80s and early '90s, we hit that apex with MTV and VH1. Milestones like winning the Viewer's Choice Award from MTV, the Moon Man, that was pretty cool. Performing at the Grammys, being nominated for Grammys three or four times. Playing the Billboard Music Awards, playing Rock in Rio in front of 130,000 people. There's so many great things that I'm happy and thankful for. The list goes on. Last year, we played Wacken in Germany and that was in front of over 100,000 people. QUEENSRŸCHE's never played that show."

On if he gets bored playing certain songs:

Michael: "For me, I don't look at it as a song-for-song basis. I look it on a performance basis. They're all integral parts of the performance. For me, it's all about having fun. As long as I'm having fun on stage, I'm going to keep doing this."