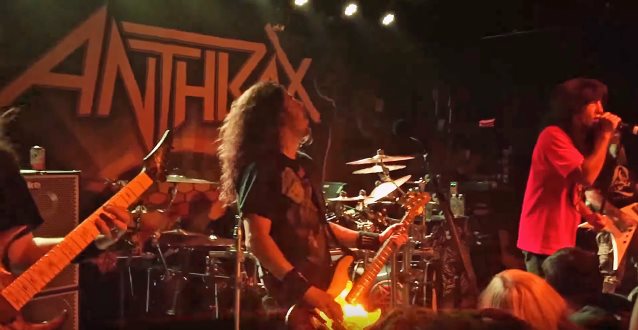 ANTHRAX performed the song "Aftershock" live for the first time since 1985 during their very special concert this past Friday, September 16 at Brooklyn, New York's Saint Vitus Bar. Fan-filmed video footage of the show can be seen below.

"Aftershock" originally appeared on ANTHRAX's sophomore album, "Spreading The Disease", which came out in October 1985. It marked the band's first LP to feature vocalist Joey Belladonna and bassist Frank Bello; they previously played on the band's "Armed And Dangerous" EP.

"The day Joey showed up at the studio, he sang JOURNEY and FOREIGNER a cappella on the mic and we were blown away," ANTHRAX guitarist Scott Ian told Rolling Stone last year. "His voice was amazing and we knew it's what we needed to set us apart from the pack. Nobody sounded like he did playing the type of music we were playing. We found our [Ronnie James] Dio, our [Rob] Halford, our [Bruce] Dickinson, no easy feat." Bello added: "He sang the beginning of the Steve Perry song 'Oh Sherrie', and we looked at each other and knew it was right fit for us."

"If it wasn't for Joey being in the band, we might not have gotten as big as we were," ANTHRAX drummer Charlie Benante said. "He separated us from the other types of bands."

All proceeds from the Saint Vitus concert will go to benefit Gilda's Club NYC, and everyone who purchases a show ticket got a special, limited-edition t-shirt created just for cancer awareness, courtesy of Jakprints.

ANTHRAX is continuing to tour in support of its latest album, "For All Kings", which sold 34,000 copies in the United States in its first week of release to land at position No. 9 on The Billboard 200 chart.

ANTHRAX has joined forces with SLAYER and DEATH ANGEL for a seven-week North American tour. The dates kicked off in Cleveland on September 9 and are hitting both major and secondary markets across the continent. 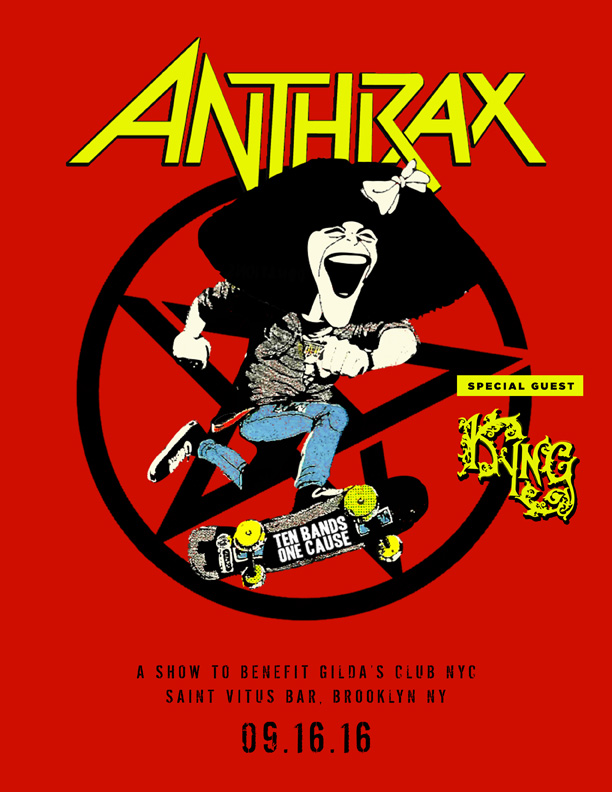