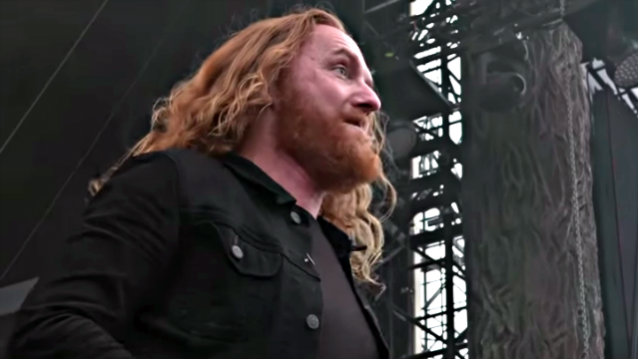 Rob Botten of Metal Master Kingdom conducted an interview with frontman Mikael Stanne of Swedish melodic death metallers DARK TRANQUILLITY prior to the band's September 18 show at The Mod Club in Toronto, Ontario, Canada. You can watch the entire chat below. A few excerpts follow (transcribed by BLABBERMOUTH.NET).

On DARK TRANQUILLITY having to cancel several shows in Florida due to Hurricane Irma:

Mikael: "We were in South America first, for two weeks. Then, we had four shows in Florida planned. We only did one of those, the first one. We were basically stuck in traffic for three days with getting the hell out, basically, and so was everyone else. We didn't see anything [from the storm]. We were just watching TV on the bus, watching CNN and all the local news and just driving north. It was weird. It was eerie, kind of scary, but of course, we were super-lucky. We were in a nice tour bus with all the facilities we needed like water and beer and all that stuff. It was weird to roll into a gas station where everything is emptied out or there was no gas. It was crazy, but fortunately, it was not as bad as they expected. It seems like people are okay. I guess it's fine. It was weird. We've never been close to anything like that before. It was a new experience. We hate cancelling shows, so that really sucked, but the venues were closed and some cities had evacuation orders."

Mikael: "Had we done the Florida shows, it was like thirty-two shows in a row, I think. We're fine with it. We don't want days off. I don't want to spend any more time away from my family then necessary. Also, I want to get out of the tour rut. Playing every day is better than having time off to do nothing. It's just frustrating."

On choosing a live setlist in a career that now spans over twenty-five years:

Mikael: "It's a nightmare. Of course there are songs that maybe have to play and then there are new songs that we really want to play. We figure out how to balance between that. There's always going to be songs that we leave out that fans want to hear, but we try our best to make sure. So far, people seem to dig it. They're really into it. We decided to play longer, cram as many songs in there as we can. It is tough. We changed the set quite a lot since the last tour, so it still feels really fresh. Now, we have two new [touring] guitar players [Christopher Amott, ex-ARCH ENEMY; and Johan Reinholdz, ANDROMEDA, NONEXIST] and it feels like a totally different experience for us."

On whether he has any fond memories from DARK TRANQUILLITY's early tour experiences:

Mikael: "We were young and stupid. It was a different time to tour. Our first tour was in '95. We toured with SIX FEET UNDER, then in '96, with CANNIBAL CORPSE in Europe, which is amazing. Touring with seasoned bands who can teach us a lot. We immediately learned everything about touring, like, 'This is what you can do. This is how you can pattern yourself. This is how it works.' We got good touring lessons immediately. We never slept, we just partied constantly, basically, those early tours. Of course, there was a lot of stupid things that happened. Sometimes we reminisce and go back 'Do you remember that?' Stupid things like that. Then again, a lot of fun things happen now, too. Now, you can plan things out. You have the ability to look things up and actually travel around. What I kind of regret the most, is I hadn't seen any of the cities. You wake up 'Oh, is there anything around? No.' Then you go back to sleep. Whereas now, I get up, I take an Uber to a cool place I want to visit or go running. I really want to see the cities. Even some cities I've been to ten, fifteen times, I still haven't seen anything yet. We made an effort now to actually get to know the cities more. That's been amazing."

On whether the band has started work on the follow-up to 2016's "Atoma":

Mikael: "No. We haven't gotten that far, yet. It's been focusing on promoting the album and touring the hell out of it. We haven't really started. I'm sure there's material and Anders [Jivarp, drums] and Martin [Brändström, keyboards] already have stuff. It's going to take a while. Also, we have to come up with something new, not just leftovers from the last session. It's going to take a while. We'll see. Maybe after the summer."

DARK TRANQUILLITY's current North American tour with WARBRINGER and STRIKER kicked off on September 6 in Margate, Florida and will wrap on October 7 in Dallas, Texas.