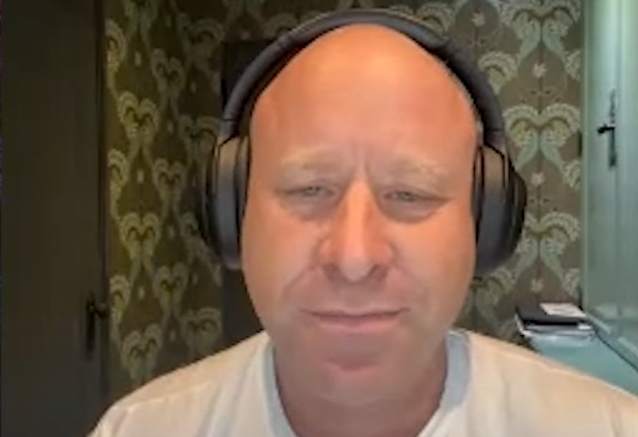 In a new interview with Germany's Rock Antenne, NICKELBACK bassist Mike Kroeger was asked if he pays attention to all the online comments about his band. He responded (as transcribed by BLABBERMOUTH.NET): "I don't really do social media anymore. I have my own Instagram, but I got off Twitter. I never did Facebook, thank God, but I got off Twitter a couple of years ago — three years ago, I guess, now. I'm thinking about getting back on, just because since Elon Musk bought it, it looks like a hilarious, fun time. All these people are so scared, I love it. I might even rejoin, just to see what happens with that guy at the helm, so to speak.

"I'm not scared of comments 'cause I think sometimes even the ones that are assholes can be really funny," he continued. "To me, if something is truly funny, it's funny. Obviously, just to throw hate at something, like us, that's not kind of funny; that's just negative. But sometimes the haters can say some pretty funny things.

"There's a lot of times when you see people… And that's one thing that the Internet kind of has fostered with sites like Reddit, et cetera, is giving people a platform to try to be funny," Mike added. "And a lot of people try to be funny, and that's kind of the problem, because a lot of people aren't funny. So I have to kind of weed through the amateurs to get to the good ones, 'cause there are some good ones in there. There are people who make fun of our band and are funny about it — I'll have a great laugh when I see that — but there is also a contingent of people online who, they want to be funny, but they're just not. And that's just very sad to me."

Arguably the most disliked band in America, NICKELBACK has earned a type of hatred so potent it's hard to fathom what they did that was so terrible to the public consciousness. It's gotten to the point that people who enjoy NICKELBACK are denying their fandom and hiding their CDs like criminal contraband.

Asked by Jorge Botas of Portugal's "Metal Global" if he understands how NICKELBACK came to be so disliked by so many people, frontman Chad Kroeger said: "I think I've got a pretty good grasp of where things kind of went off the rails for us.

"I think that because we write so many different kinds of music, I think that if you were listening to a radio station any time between 2000 and 2010, '11, '12 even, we were kind of tough to get away from," he explained. "'Cause if you didn't wanna hear it and you changed to a different radio station, you'd probably hear it on there, and then changed to a different radio station, you probably were gonna hear it in so many different places. And we were really tough to get away from. And that's not my fault. [Laughs] We just write the songs. And so with that comes backlash. And then what happens is then comedians start making jokes, and then it starts making it on to TV, and then it makes it into movies and stuff like that. And then it just turns into this wave of, it's fun to pick on and it's an easy joke. And I get it. I understand. There are bands that when I hear them on the radio, I… And they're very popular bands… I mean, we all have those. No one is exempt from that. There are certain bands where you just hear them and you just don't like 'em. And other people may — half the world may love them, and I'll just be, like, 'No. I just cannot hear this band one more [time].' And just like everyone else does, I just change the channel.

"But we became the whipping boy of the music industry for a while there. But whatever. It's just part of the history of the band."

According to Chad, NICKELBACK is not the first group to experience the kind of severe backlash that has earned him and his bandmates the title of "the most hated act in the world."

"It's funny because we were at the American Music Awards, and we were presenting, and we presented to DEF LEPPARD," Chad recalled. "And when we walked backstage afterwards, Joe Elliott and Phil Collen turned to me, and they were just, like, 'Dude, thank you so much.' I'm, like, 'For what?' They were, like, 'For taking the trophy. We get to pass the baton to you for being the most hated band in the world now.' And I was just, like, 'Oh, yeah. 'Cause I want that.'

"And it's funny — we went for dinner with AC/DC in Chicago years and years and years ago," Chad added. "And this whole thing came up. And Brian Johnson said when they released 'Back In Black', they were the most hated band on the planet. So I feel like we're in good company. [Laughs]"

Back in 2016, a student named Salli Anttonen at the University of Eastern Finland conducted a study to find out why there is so much hate directed towards NICKELBACK. Anttonen analyzed Finnish reviews of the band from 2000 through 2014 for her paper, which was titled "Hypocritical Bullshit Performed Through Gritted Teeth: Authenticity Discourses In Nickelback's Album Reviews In Finnish Media".

Anttonen found that critiques of the band became harsher as they became more popular, noting: "It became a phenomenon where the journalists were using the same (reasons) to bash them, and almost making an art out of ridiculing them."

Even though the study was based solely upon Finnish reviews of the band, the critics' animosity toward the group has been a global phenomenon.

Anttonen concluded: "NICKELBACK is too much of everything to be enough of something. They follow genre expectations too well, which is seen as empty imitation, but also not well enough, which is read as commercial tactics and as a lack of a stable and sincere identity."

NICKELBACK's new album, "Get Rollin'", was released on November 18 via BMG.