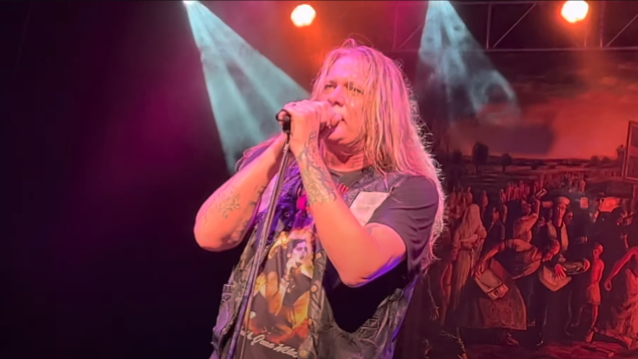 During an appearance on a recent episode of the "I Am All In With Scott Patterson" podcast, former SKID ROW singer Sebastian Bach was asked if there has been any talk of a reunion of the band's classic lineup. He responded: "There was texting and a little talking. But there needs to be more talking."

When interviewer Scott Patterson pointed out that some of the other 1980s rock bands have been able to play stadiums in recent years, Bach concurred, saying: "Absolutely. POISON and Joan Jett, MÖTLEY CRÜE, DEF LEPPARD… Yeah."

Asked "what is wrong" with the SKID ROW guys that they won't agree to reunite with Bach, Sebastian said: "Well, I have a manager named Rick Sales, and he protects my interests. So they've gotta deal with the business side of things, and they would rather maybe not deal with that, as far as I can tell — just not deal with that. But there's always a number. I mean, we're all still alive."

Earlier this year, SKID ROW guitarist Dave "Snake" Sabo was asked by Scott Penfold of Loaded Radio how he feels about people still calling for a reunion with Bach. He said: "Well, it's been 23 years [since SKID ROW reformed], so to say that I'm over it would be an understatement. We attempted [a reunion] slightly [back in 2016]. We dipped our toes in the water and realized that it didn't feel so good. It's just one of those things where we still could not see eye to eye; we couldn't even get past the point of simple texting.

In 1999, SKID ROW reformed and, after a bit of shuffling over the years, featured a lineup consisting of bassist Rachel Bolan, guitarists Sabo and Scotti Hill, alongside drummer Rob Hammersmith and singer Johnny Solinger. SKID ROW fired Solinger over the phone in April 2015, a few hours before announcing ex-TNT vocalist Tony Harnell as his replacement. Eight months later, Harnell exited the band and was replaced by South African-born, British-based singer ZP Theart, who previously fronted DRAGONFORCE, TANK and I AM I. Theart was fired from SKID ROW in February and was replaced by Erik Grönwall, who was previously a member of the Swedish hard rock band H.E.A.T.

Last year, Bach told Florida's 98.7 The Gater radio station that "there's no reason" for the classic SKID ROW not to reunite. "When those guys [in SKID ROW] try to say [about me], 'He's difficult to work with,' let me just say this one more time. We have not been in the same room together since the year 1996," he said. "Shut the eff up about you thinking you know what I'm like. You don't know anything about what I'm like. And the 'Gilmore Girls' think I'm okay to work with; Broadway thinks I'm okay to work with; the 'Trailer Park Boys' think I'm okay; GUNS N' ROSES think I'm pretty cool. We're not getting any younger."

Two years ago, SKID ROW bassist Rachel Bolan also confirmed that he and his bandmates "were entertaining the idea" of reuniting with Bach following Harnell's departure. But Rachel shot down the possibility of a rekindling of his friendship with Sebastian, explaining: "Well… Here's the soundbite for Blabbermouth. I wouldn't say we were friends [when we were in a band together]. We were bandmates. You know what I mean? We're two very different people." Bolan added that he hadn't seen Bach "in years."