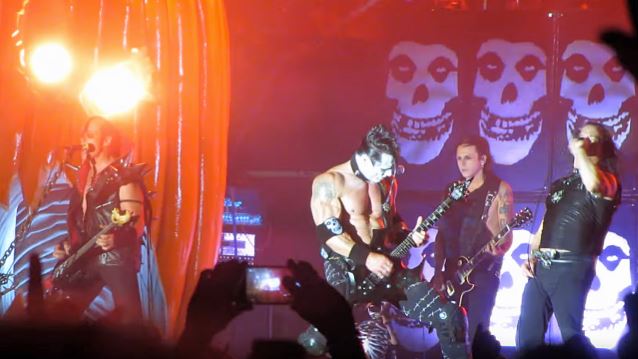 The reunion, billed as "The Original Misfits," took place at at Denver's Riot Fest And Rodeo. Joining Glenn, Jerry and Doyle at the show was drummer Dave Lombardo (SLAYER, SUICIDAL TENDENCIES).

Asked after the show if this feels like something that can continue, Only told Rolling Stone: "I want it to continue. I know Doyle wants it to continue. I know Glenn wants it to continue. We just have to be big enough people to make it continue. And that's where we're at. Whatever it takes. We're going into our 40th anniversary so the timing couldn't be more perfect. Eventually, Doyle's got to write a new album; I've got to write a new album; Glenn's got to write a new album. Why don't we work together and make the greatest album ever? Now we've got different elements. We've got Doyle playing more of a metal kind of thing. We've got Dave, who we're trying to figure out what the fuck he's doing. And Glenn's got his own thing. And Acey [Slade, second guitar] fills in good too. And I've got the band where it is today. So it's a matter of remolding and using all the different elements that I've got."

Regarding whether they have had a conversation with Glenn about making a new album, Only said: "I think it's got to evolve naturally. The thing is we've tried to plan things and then we stand there and wait and as it comes we'll just do it. When we go back — I don't know about Glenn — but I canceled our touring and everything for this so I'm going to go home and write and lift."

On the topic of what it was like working with Lombardo at the first reunion concert, Only said: "Obviously there's a little transitional period for Dave coming from a thrash-metal background with SLAYER or even SUICIDAL TENDENCIES. Dave is molding into this Fifties atomic-punk band. He needs to learn the fine elements of our songs. When he gets that, we'll be good. Doyle was happy with him today… Because Doyle was, like, 'Dave really doesn't know our material but he wasn't a fanboy.' That was one of the things I liked about him. So if we move forward as a unit and start writing new albums with somebody like Dave, we've got a drummer who's from a different place; we might add a different element into our mixture. You feel him build the energy level. I like playing with him. And he's a nice guy."