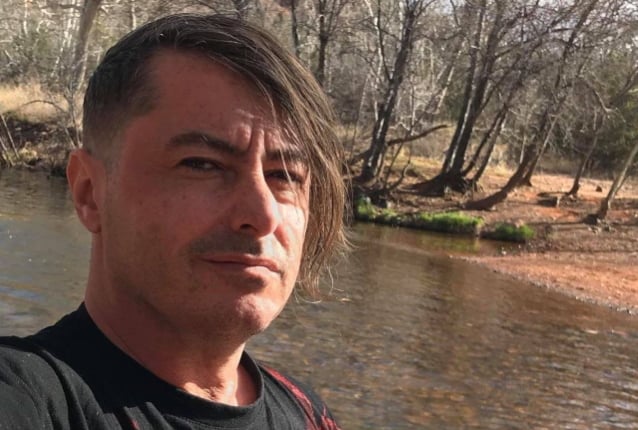 MITCH HARRIS Opens Up About His Absence From NAPALM DEATH

NAPALM DEATH guitarist Mitch Harris, who has been taking a leave of absence from the band since late 2014 to focus on his family life, spoke to Heavy Culture about his involvement in NAPALM's new studio album, "Throes Of Joy In The Jaws Of Defeatism". Harris, who lives in Las Vegas, Nevada, played guitar on the disc but is not part of the group's touring lineup.

Asked why he hasn't been part of NAPALM's touring lineup for almost six years, Harris said (see video below): "I finished the 'Apex Predator' recording, and my father was very sick in Las Vegas. I lived in England 26 years. Time goes very fast when your parents are aging. So I came home to see how he was. He needed surgery on both knees. But then [after] many tests, [the doctors] said, 'Oh, you have cancer.' So I went home, I got my family and I came back. And I said, I will finish all the shows for the rest of the 'Utilitarian' [cycle]. They do 200 shows a year, and I was the full-time carer for my father, and also my mother was here alone with him, and she couldn't help him so much.

"When I moved [back to Las Vegas], he died the day I arrived, actually, when I came back," he revealed. "He had his surgery. And it was shocking. Then my mother was alone, and we couldn't leave her. We were happy. We settled in. [It was a] crazy culture change for the family and my kids. Yeah, it was very shocking. But I was very happy to be home. So then, three years later, my mother died. Again, she was sick for a while."

According to Harris, he no longer wants to spend long periods of time away from his family.

"I can't travel, and I don't want to travel," he said. "I don't feel like it's that important — 'Oh, I need to be there for the fans, the band, traveling on a plane every day when my family needs me.' Sometimes there comes a point in your life where you have to just do the right thing, and I would never feel happy if I was not there when they needed me.

"Some people choose their career or their lifestyle over family," he continued. "It depends on the relationship. We were always very close. And I was recording music and making music from home. And they [NAPALM DEATH] continued without me for a long period of time. I mentioned doing some shows to them, but they said if I came back full-time, and I can't commit. I'm actually happy.

"I'm sorry for people that they miss me, or whatever, but if you really miss me, there's a NAPALM record, which I played on, which is very intense, and BRAVE THE COLD. Please support it and give it a chance, because this is part of my future.

"I'm not saying that I'm not coming back ever, but right now, time has passed," Mitch added. "COVID — we don't know when anyone's coming back. So it's a very strange time. I'm just glad to be active again. I never made a public statement. I'm a very private person, for the most part. The band, it was difficult for them to explain every night, the same story. 'Where's Mitch?' 'Oh, family problems.' Other people speculated: 'Oh, is he sick?' or something. Nobody knows. It's kind of private. Right now, it's more public. That's another reason I wanted to play on the NAPALM — for the community that's followed us all these years, that they have something new to get them through some dark times maybe. I remember the good old days, and look towards the future for everything."

Back in the summer of 2018, NAPALM DEATH frontman Mark "Barney" Greenway told TotalRock Radio that Harris was still a member of the band. "Basically, Mitch went on hiatus, just because of circumstances," he said. "Officially I can say that he has played on the new album — the brand new album. Because here's the thing: everybody was, like, 'Oh, Mitch hasn't played with you in three years. He must be out of the band.' We were, like, 'Look, if he's out of the band, we'll let you know. But he isn't.' And nobody believed us. Well, not nobody, but a lot of people were, like, 'No. This can't be right.' We were, like, 'Look, he's on hiatus. He's dealing with some quite serious stuff. So, please.' And so, yeah, he has played on the new album. What will happen above and beyond that, I'm not sure yet. But, yeah, he's played on the new album."

"Scarcity" was released on October 2 via Mission Two Entertainment. The disc was produced by Logan Mader, who has previously worked with GOJIRA, FEAR FACTORY, CAVALERA CONSPIRACY and W.A.S.P., among others.