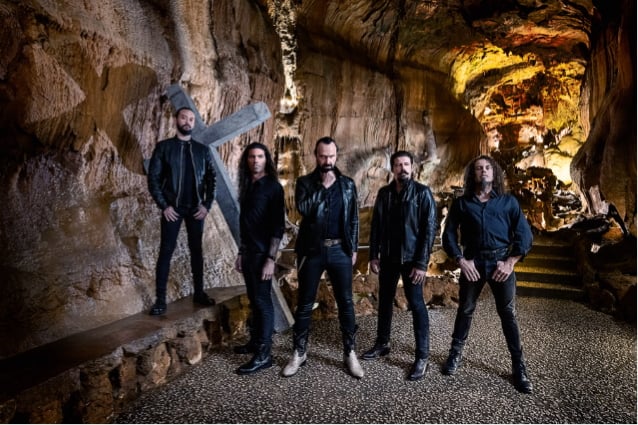 Portuguese metallers MOONSPELL have canceled their previously announced tour of United Kingdom and Ireland due to "the huge financial crisis UK and Europe are living through that affects entertainment sales." The trek was scheduled to kick off on November 30 in Colchester and conclude on December 11 in London.

Earlier today (Wednesday, November 16),MOONSPELL released the following statement via social media: "By agreement with the majority of the promoters and our agency, we have decided to CANCEL our Fullmoon Over The UK-IRE tour.

"We are obviously desolate in bringing such sad news yet we had no other option. The reasons behind this decision are, as you can imagine, the huge financial crisis UK and Europe are living through that affects entertainment sales.

"We wish to meet you under better circumstances and will work hard to bring a show that is worth your money and time, hopefully in 2023.

"To everybody who bought a ticket please accept our apologies and gratitude. You can ask for your refund at your ticket provider.

"To all the promoters, we sincerely thank you for your efforts and preference and hope to work together again in a near future.

"The shows in Greece, Israel and Dubai are going to happen and are not affected by this cancellation.

"Thanks for your support, under the spell!!!"

This past August, MOONSPELL canceled its summer 2022 North American tour due to "unsolvable logistic and transportation problems".

In September, MOONSPELL released a very special Blu-ray/DVD and album, a live performance of their latest studio album, "Hermitage" (2021),with "From Down Below - Live 80 Meters Deep" via Napalm Records.

In 2020, MOONSPELL parted ways with original drummer Miguel "Mike" Gaspar and replaced him with Hugo Ribeiro (no relation to singer Fernando Ribeiro).

By agreement with promoters and our agency, we have decided to CANCEL our Fullmoon Over the UK AND IRELAND tour.

Posted by Moonspell on Wednesday, November 16, 2022