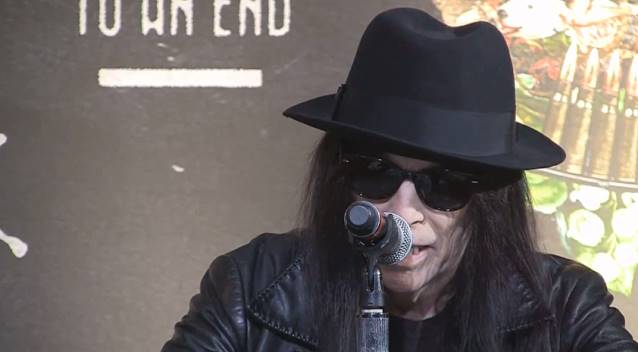 MÖTLEY CRÜE guitarist Mick Mars plans to release at least an EP of solo material once the band has completed its "Final Tour", with the possibility of even more songs surfacing in the years to follow.

MÖTLEY CRÜE held a press conference on January 28 at Hotel Roosevelt in Los Angeles where they announced that the band will launch the "Final Tour" later this year, with the group planning to play 72 shows in North America in 2014 and more overseas in 2015. Making it official, the four members of the band had their lawyer draw up a formal "cessation of touring" agreement that goes into effect at the end of 2015 and prohibits the members of the group from going on the road again under the MÖTLEY CRÜE banner.

During an appearance on the March 3 edition of Eddie Trunk's show "Trunk Nation" on SiriusXM's Hair Nation, Mars was asked if he had any plans to pursue a solo career once MÖTLEY CRÜE was done touring.

"Loyalty is kind of important to me, but I mean, doing side projects and everything else, [there is] nothing wrong with it at all," Mars said. "But I have my own stuff that I have been stashing for a long time."

Regarding what shape his debut solo release will take, Mars said: "I can honestly say that I am going to release at least an EP. As far as a whole album right now, I won't release a whole album 'till I think every single one of my songs is an 'A' song. And I've got a shitload of songs, and they're all 'B' songs, 'C' songs… I'll give them to, like, baby bands coming up, TV commercials, movies, soundtracks, whatever the heck, but I will not put them on my record until I believe in my heart that they're 'A' songs, that when you hear them, you have to have all of them. You know what I mean? No fillers. If I hear a filler in there or anything I think is a filler? No. But then, who am I to judge? Then you release singles."

He continued: "I have about six songs… I mean, I have way, way more than that, but they're all, like… to me, they don't matter. They're laying there. I mean, stacks. And I have a studio in my house, of course, and I go down there almost every day. And just in the past week or so, I've written six new songs which I believe are pretty much on their way to being 'A' songs. But I just need someone to come in and help me, not arrange, by any means… I know what I'm hearing and I know what I wanna hear. It's, like, [I need] a guy to help me [lay vocals on top of it]… 'cause I'm not a singer."

Asked what he plans on doing after MÖTLEY CRÜE retires from touring, Mars told Edmonton, Alberta, Canada's 100.3 The Bear radio station nack in January: "A solo record. People have been asking me for that for years and years and years. And 'Why hasn't Mick written a book?' So that, of course, is gonna be in the works. I haven't started anything or figured out who I want to write with me, or help me write it. But doing that kind of a thing. Putting together, probably, a cool band with some cool friends of mine and stuff, and going out and doing some… you know, a few weeks here and a few weeks there, touring… but not as the MICK MARS BAND; I won't do that. [Laughs] You'll see, like, a name, and you'll go, 'Hey, who's that?' 'I don't know' That's the name of the band."

In a September 2012 interview with Jacky Bam Bam of the 93.3 WMMR radio station in Philadelphia, Pennsylvania, Mars spoke about his long-rumored solo album of R&B, soul, and blues songs, which he had asked American R&B and soul singer-songwriter Macy Gray to guest on. "I would love to have Macy Gray sing stuff for me," he said. "What I have in mind is not like your shuffle beat kind of blues, it's more of an Etta James kind of blues. If you listen to the first Paul Butterfield album, with Sam Lay playing drums, there's not a shuffle in it. He takes the drums and he does a whole different thing with them. I want lots of movement in the rhythm, so you can't help but move. Like a Macy Gray voice on it, or Andy Garcia — people like that are, to me, they're fabulous singers. Not that I wanna do a hodgepodge of singers and stuff, but to [have them] guest on a couple of songs would be very cool."