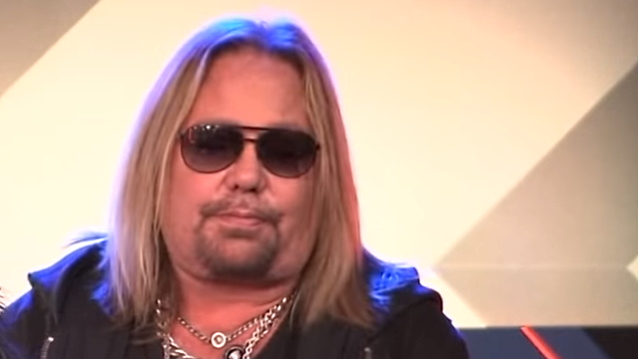 MÖTLEY CRÜE singer Vince Neil was a guest on this week's episode of Zane Griggs's "Hunger Hunt Feast" podcast⁠. Speaking about the immense public interest in the band's "The Stadium Tour" with DEF LEPPARD, POISON and Joan Jett, which was originally scheduled to take place this summer before being postponed until 2021 due to the coronavirus pandemic, Vince said (see video below): "It's a nice feeling, that so many people want us to get back together. Because we basically broke up five years ago — we basically called it quits and said that it was a good run, it was a lot of fun, okay, we're done. So I continued to tour with my solo band up until COVID, and now I've had basically almost a year off because of not being able to tour with my solo band. 'Cause everything got shut down — everything. But it looks like it's loosening back up. I have a couple of solo shows coming up in the next couple of months. It's gonna be fun just to get back and sing a little bit. I've never gone this long without performing or singing in my entire life, since I was 16. So it'll be fun to just get back out there.

"A lot of people were pretty bummed out when we decided to retire, basically," he added. "The excitement around the tour has just been pretty amazing. We have fans that maybe we didn't know we had. [Singer] Carrie Underwood had her podcast the other day, and she was talking about her number one band that she loves is MÖTLEY CRÜE. And she's been singing MÖTLEY CRÜE since she was a kid, singing 'Smokin' In The Boys Room', 'cause her older sisters thought it was funny. So it's pretty cool. People like that and everything in between. A lot of different generations — there'll be people that grew up with us, and their kids are coming out."

The 30-date "The Stadium Tour" was originally scheduled to kick off this past June. Inspired in part by the success of MÖTLEY CRÜE's Netflix biopic "The Dirt", the trek was meant to run through the entire summer, hitting major cities including Miami, Atlanta, Philadelphia and Detroit before wrapping up September 5 at SoFi Stadium in Inglewood, California.