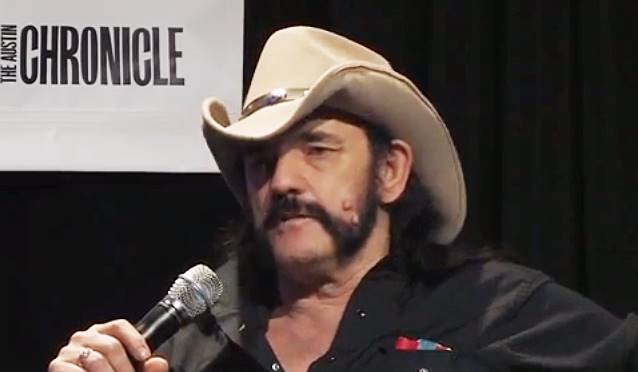 In the December 2013 / January 2014 issue of Revolver magazine, MOTÖRHEAD's Lemmy Kilmister was asked about the band's performance at this year's Wacken Open Air festival in Germany, which was cut short after six songs due to his health issues.

"It was strange," Lemmy explained. "The Wacken date was going really good and it sounded really good, too. And then I got this pain in my back that came out of nowhere and it was crippling. When you get to this age, stuff starts going on, y'know? There's nothing you can do about it. At this stage, things would be going wrong anyway, even without my history."

Asked if he has any plans to retire, Lemmy, who turns 68 years old in December, said: "No, I ain't done yet with the music. After I get better, we're gonna try to tour again, and if I can't do that full-on, I want to do another album with [the rockabilly band] HEAD CAT, and, of course, I want to do a couple more MOTÖRHEAD records. But the next thing I've got coming out is my solo album, which is almost done. I still want to do a track with [SKUNK ANANSIE vocalist] Skin before I put it out. There are two tracks with the REVEREND HORTON HEAT, two with THE DAMNED, a track with Dave Grohl [FOO FIGHTERS, NIRVANA], and a track with Joan Jett. Right now we're thinking of calling it 'False Teeth For The Deaf'. It's all just great rock and roll, that's the only way to describe it. Some of it is bluesy and some isn't. It's not MOTÖRHEAD, but obviously there are elements in common."

In a 2004 interview with Metal Maniacs magazine, Lemmy stated about his solo CD, "I've got two [songs recorded] with [German hard-rock band] SKEW SISKIN [reportedly titled 'Stand Upon The Mountain' and 'Don't Matter To Me' Ed.], which are fucking great! And I've got two with the REVEREND HORTON HEAT, some good psycho-metal-billy! I've got a track from Dave Grohl that I'm still sorting out and two tracks from THE DAMNED [including a cover of THE DAMNED's 'Neat Neat Neat']. That's with Dave and The Captain! Some good stuff."

It was previously reported that guitarist Jim Voxx of SKEW SISKIN, who own Berlin's Monongo studios, was producing/recording and mixing two of the songs for the project. A full horn section was recorded, a saxophone player, a blues piano player and a lot more.

Lemmy's health issues caused the band to cancel a number of European festival appearances this past summer — including shows in France, Germany and Russia. The dates were called off when doctors discovered an unspecified haematoma, a pool of leaked blood gathered in Lemmy's muscles. The legendary rocker is also suffering from Type 2 diabetes, diagnosed more than a decade ago, and has had a defibrillator fitted earlier this year to iron out the uneven bumps in his heart.

Lemmy takes two pills every day for his diabetes, which has affected the circulation in his legs. As a result, his legs stiffen and ache if he walks too far and his back hurts if he stands for too long.