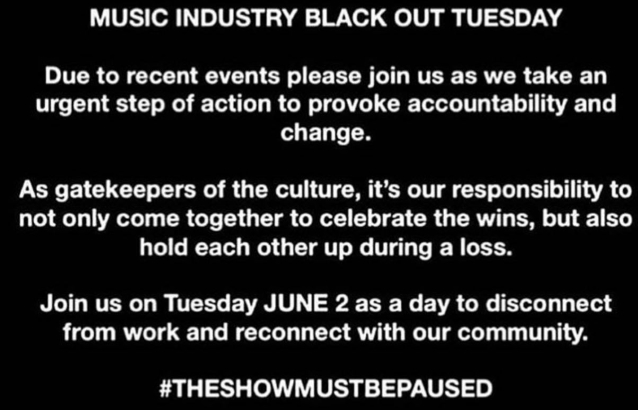 A number of record labels and other music industry members have joined forces to make June 2 "Black Out Tuesday" in response to the killing of George Floyd and nationwide protests.

Floyd, a 46-year-old black man, was killed in Minneapolis by a police officer in an incident caught on camera. The officer, Derek Chauvin, kneeled on his neck for nearly ten minutes while Floyd was handcuffed. Chauvin has since been charged with third-degree murder and manslaughter.

Warner Records, Universal, Sony, Interscope Geffen and Columbia are among the labels that have pledged to "disconnect from work and reconnect with our community" on Tuesday.

"Due to recent events please join us as we take an urgent step of action to provoke accountability and change," a message being used to raise awareness of the campaign reads.

"As gatekeepers of the culture, it's our responsibility to not only come together to celebrate the wins, but also hold each other up during a loss."

Universal Music Group spoke out against the killing of Floyd, writing on social media: "In the words of Dr. King, 'There comes a time when silence is betrayal.' When you have a responsibility to raise your voice for change. That time has come.

"There's no place in this world for hate and violence. In the face of bigotry and prejudice, we're proud of the way our artists, songwriters and employees have spoken out. At UMG, we're committed to being a force for constructive change."

Columbia wrote: "We stand together with the Black community against all forms of racism, bigotry, and violence. Now, more than ever, we must use our voices to speak up and challenge the injustices all around us."

A number of rock and heavy metal artists have spoken out against racism in the aftermath of Floyd's death, including members of GUNS N' ROSES, KISS and SLIPKNOT.