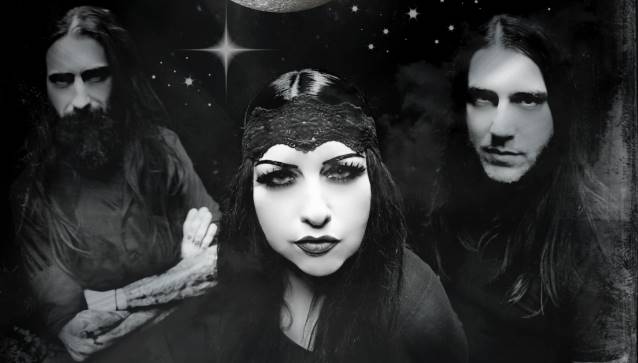 Los Angeles-based underground metal veterans and DIY enthusiasts MY RUIN — featuring vocalist Tairrie B., her husband and multi-instrumentalist Mick Murphy and bassist Luciano Ferrea — have premiered the music video for the song "Heretic Dreams", taken from the band's latest album, "The Sacred Mood", which is out now and available digitally worldwide via iTunes and Amazon.

The unholy eloquence of "Heretic Dreams" invites listeners to worship at the alter of their own imaginations taking them on a magical journey through the heart of a non-believer with percussive lyrical patterns winding through a sludgy musical rock garden of driving anthem riffs and anathema sentiment.

Produced by Murphy along with longtime friend Joel Stooksbury, "The Sacred Mood" was recorded in August 2012 at Soundtrack Black Studio in East Tennessee.

Tairrie previously stated about "The Sacred Mood": "In an industry that is ever-changing, we're not a band who pays attention to the current trends. We've found our sound and we simply do what we do while staying true to our roots. I think our fans appreciate our integrity and we appreciate our fans.

"The atmosphere of the new album is heavily drenched in the heat of the South, where it was recorded and fueled by insomnia-filled nights in Los Angeles where it was written. The cover was designed with this in mind by a talented Manchester, U.K.-based artist and illustrator named Kayleigh Brookes, who also happens to be a longtime fan of the band. The art that goes with the album is very different than anything we've previously done before. We decided to use real elements of nature mixed with iconic illustrations to create something unique to MY RUIN that would go with the otherworldly language of the lyrics. We wanted an ethereal image for the cover and chose the moon for the background because we felt it evoked the mood of the album as a whole. The image was actually inspired by a photograph which was taken by Tor Burrows, who has worked with me creating music videos for MY RUIN's last two albums. I really enjoy working with Tor on our videos and being that I have always worked alone when designing the artwork for many of our previous recordings, I thought it would be an interesting change to collaborate with someone on this side of things."

Find more on My ruin