"We will be recording our show at the Ragers Elite festival [at Kulturrevier Radbod] in Hamm, Germany [on November 29]. We will play some old pearls and a bunch of new stuff. This show will be recorded by six cameras and a 16-track recording machine.

"This will be the first show for us in new lineup. After the show, we will have a meet-and-greet with our friends and fans and you can meet our new mates Constantine [guitar; ex-NIGHTRAGE] and Connie [Andreszka; bass]. They are very excited to play this show."

MYSTIC PROPHECY will enter Prophecy Studios on December 19 to begin recording its sixth album for an early 2009 release. The as-yet-untitled effort will be mixed in Sweden under the direction of Fredrik Nordström (DIMMU BORGIR, ARCH ENEMY, IN FLAMES) and R.D. Liapakis (FIREWIND, CHASTAIN, ELDRITCH).

The band released its latest album, "Satanic Curses", on October 19, 2007 via Armageddon Music. 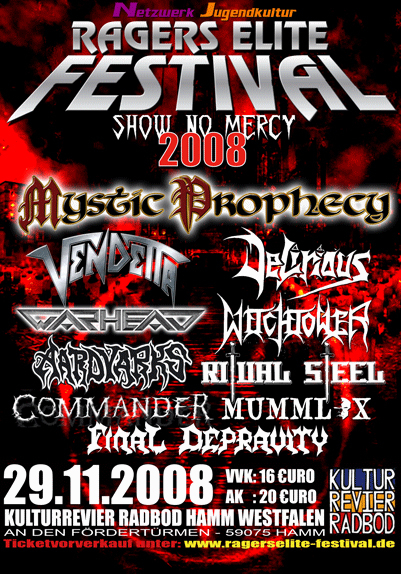