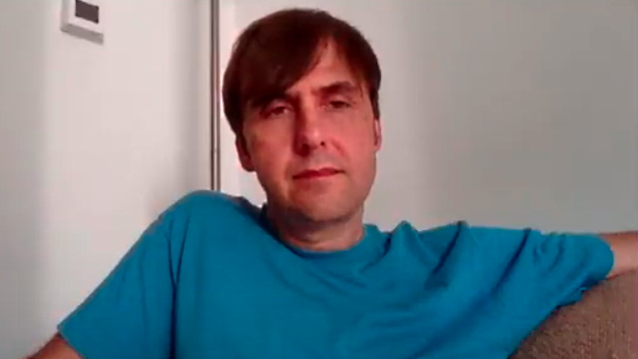 In a recent interview with Full Metal Jackie's nationally syndicated radio show, vocalist Mark "Barney" Greenway of British extreme metal pioneers NAPALM DEATH discussed the troubling health and economic realities of COVID-19 and the devastating impact the coronavirus pandemic has had on the music industry, with canceled concerts, tours and music festivals, all leaving hundreds of thousands of crew members out of work.

"First and foremost for me is the protection of the vulnerable, because as a human being, I don't wanna sacrifice other human beings for just the sake of opening things up," Barney said. "Much in the same way as the things that NAPALM DEATH generally talks about — we don't sort of walk over people to get to what we need; that's not the way to do things, as far as I'm concerned.

"I know it's not easy," he continued. "A lot of bands are missing out, and we are too. We are slightly worried about it, but I'm just quite philosophical about it at the moment. I'm just kind of waiting for things to move forward. I don't know when it's gonna be. I don't know if it will get to the point where I'm completely desperate myself. But I've always lived very simply anyway. I've made a few extra adjustments, and I'm kind of getting through it okay. But I don't know is the answer, and we'll just have to see how it goes.

"Obviously, this isn't just exclusive to people in the arts or musicians or however you wanna put it — this is for a lot of people. And so we've kind of gotta roll with it for a while and see where it goes.

"What I would say, overall, is there needs to be more government assistance, or assistance for everybody — whoever you are and whatever your circumstances are," Barney added. "If governments are supposed to — if they're there for anything at all, which is to try and protect the people that they serve, then they have to realize this is a unique situation. People should never be allowed to go without food or shelter or anything like that."