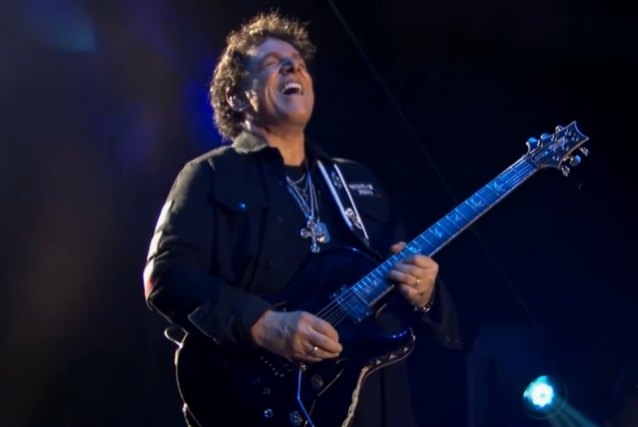 NEAL SCHON Wants JOURNEY To Embark On 'An Evening With'-Type Tour, Playing For Over Three Hours Every Night

In a new interview with Kyle Meredith, JOURNEY guitarist and founder Neal Schon discussed what the future holds for the band's live shows. In fact, Schon said that after JOURNEY's stadium tours, fans could see "An Evening With"-type performances that could stretch well beyond three hours with a much bigger production than anything he and his bandmates have ever tackled before.

"Next year is my 50th anniversary with JOURNEY, from the beginning of it, with Herbie Herbert and myself, and starting in mid-1972, Neal explained (as transcribed by BLABBERMOUTH.NET). "I know it says on the Internet that '73, that it was formed — maybe the name JOURNEY was, but the beginning of the band started in '72 with Herbie and myself. And so taking all into account to that, I felt like I wanted to encompass it all. And what I'm still really looking forward to doing, and I know that we're on our way there, because we're selling out these arenas very quickly now, and we're gonna be going into some stadiums — in '23, probably the end of '23 and '24, we'll be back in stadiums. But what I do wanna do is somewhat what RUSH had been doing for a long time, is 'An Evening With…'. And I've had the opportunity to kind of do that in a few different situations to test it out with audiences and see what they think, and they just absolutely love it."

Asked if that means that fans could JOURNEY fans could potentially see Bruce Springsteen-style live performances from the band that last more than three hours, Schon said: "I think so, definitely. We're definitely capable of doing it. Not only do we have Arnel Pineda, who's a phenomenal singer — and now singing better yet than he's ever sung because we got the right mixer in front and got his headset sorted out. Just think about that — he's been with us 15 years and he didn't know how to explain it; he couldn't hear correctly until just most recently. And I'm, like, 'This is just bizarre.' And now it sounds like a record in front every night. But not only do we have Arnel, we have [drummer] Deen Castronovo, who's been my little brother forever; he sings his ass off as well. Then we have Jason Derlatka, our second keyboardist, that also sings. And so we're really, really covered vocally to where the ball can be passed around a bit and it's not so much strain all on Arnel to be able to do a three-and-a-half-hour show, with an intermission in the middle. Plus when we get to that [point], I'm really gonna put some thought into creating a really mind-effin' show, to where we're doing bits and pieces of where we came from — whether it's just used between songs. There's ways to use those musical pieces. We don't have to play the whole song. It doesn't have to sound like Las Vegas either, like a cliché greatest hits — let's just do this verse, this chorus. No — I'm talking like using obscure pieces that haven't seen the light of day in many, many years and using it in between songs to make the audience go, 'Wow!' I mean, it's all sitting there. It's just sitting there. The only thing that's stopping you is yourself from doing it. That's kind of where I'm at right now."

JOURNEY's new album, "Freedom", arrived today (Friday, July 8) via BMG except in Europe and Japan, where it was issued via Frontiers Music Srl.

"Freedom" is the first album of new JOURNEY material to be released in 11 years, since 2011's "Eclipse", and in addition to longtime keyboard player and primary lyricist Jonathan Cain and Pineda, one more member was recruited for the LP — bassist extraordinaire Randy Jackson, who had played on JOURNEY's 1986 effort "Raised On Radio".

JOURNEY was inducted into the Rock And Roll Hall Of Fame in 2017, and 2018's co-headlining tour with DEF LEPPARD was the band's most successful tour to date, landing them in the Top 10 year-end touring chart with more than 1 million tickets sold, and earning them the prestigious Billboard "Legends Of Live" touring award. March 2019 saw the release of "Escape & Frontiers Live In Japan", a live DVD/CD set from their concert at the Budokan in Tokyo featuring the band's first-ever performances of the albums "Escape" and "Frontiers" in their entirety. JOURNEY has also received a star on the Hollywood Walk Of Fame and were inducted into the Hollywood Bowl Hall Of Fame. Additionally, the band is the subject of the award-winning documentary "Don't Stop Believin': Everyman's Journey" about the band's resurgence upon adding Pineda as lead singer after Schon discovered the Philippines native on YouTube.