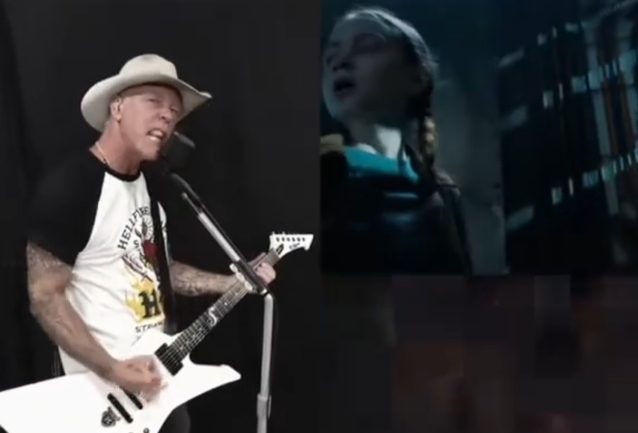 METALLICA has shared a new TikTok video in which the four members of the band "duet" with the "Stranger Things" character Eddie Munson on "Master Of Puppets", the title track of their 1986 album that is incorporated into the finale of season four of the Netflix series.

On the left side of the minute-long, split-screen video, guitarist/vocalist James Hetfield, drummer Lars Ulrich, guitarist Kirk Hammett and bassist Robert Trujillo mime to the track in a rehearsal space, while on the right side, footage plays out from the "Stranger Things" scene in which Munson performs what he calls "the most metal concert ever" — including shredding "Master Of Puppets" on his beloved Warlock guitar — in "Stranger Things"' "Upside Down" alternate universe during an attempt to help his friends vanquish the Big Bad of the season, a demon named Vecna.

"Eddie… this is for you!" reads the caption on METALLICA's video.

On Thursday (July 7),Hammett praised Tye Trujillo, the 17-year-old son of Robert Trujillo, for contributing "additional guitar tracks" to the version of "Master Of Puppets" which appears in "Stranger Things".

"Very proud of my little bro Tye Trujillo who pulled off the lead to Master of Puppets for the Netflix show Stranger Things - and he's not a guitar player but a bass player just like his pop !!!" Kirk wrote on Instagram. "Impressive !!!!!"

Apparently as a result of the renewed attention "Master Of Puppets" has received thanks to being featured in Netflix's hit original series, the song is currently sitting at position No. 14 on Spotify's Top 50 Global chart.