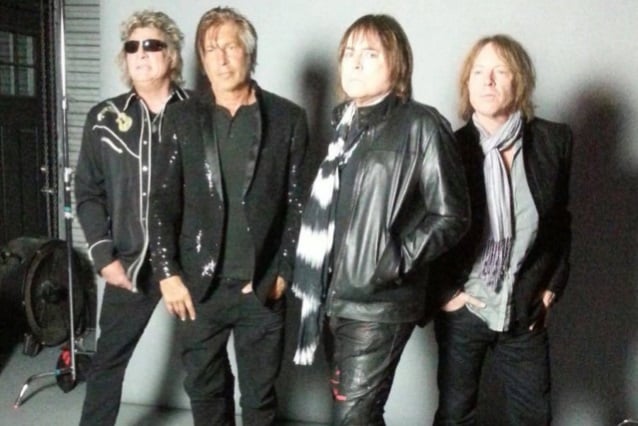 New Song From DOKKEN's Classic Lineup Is 'Like 'Paris Is Burning' Meets 'In My Dreams',' Says DON DOKKEN

The classic lineup of DOKKEN — vocalist Don Dokken, guitarist George Lynch, bassist Jeff Pilson and drummer "Wild" Mick Brown — filmed a video in Los Angeles last month for a new song called "It's Just Another Day". The track, which will be featured on the band's forthcoming CD/DVD package, marks the the first new song by the classic DOKKEN lineup since the 1997 "Shadowlife" album.

During a recent appearance on the "The Classic Metal Show", Don Dokken stated about the Jamie Brown-directed clip: "There's some footage in the background, superimposed, from [DOKKEN's classic videos] 'Breaking The Chains' and 'In My Dreams' and 'Heaven Sent'; we threw a couple of little old clips superimposed in the background — a bit of nostalgia. But we were laughing 'cause this is probably one of our best videos we've ever done and it didn't cost close to what we used to pay. Because back in the day it was film. Now, I mean, c'mon — everybody's got an iPhone and you've got GoPros. People are making movies on GoPros now, so the cost has come down from a quarter million down to nothing."

As for the musical direction of the new song, Don said: "I'm really happy. I think it's very DOKKEN-sounding, it's very classic '80s — big harmonies. It was nice and refreshing to hear Jeff and Mick singing background vocals. They wrote the song, I guess — George and Jeff. I wasn't there — they wrote it. And when they gave it to me, I wasn't really that over the moon over it. It was kind of slow and kind of moody and kind of slow and dirgey. But George likes to play those heavy kind of slow grooves — 'Heaven Sent'-ish. And actually, Jeff had written the lyrics, Jeff had written all the vocals, and I just said, 'I don't like it.' I said, 'If we're gonna do a video after two decades, I think the song should be kicking, rocking, up-tempo.' So I did what I do, and I said, 'Why don't we just speed this baby up and kick it in the ass? And let me have a crack at it. Let me try to comp some lyrics and a chorus, and just let me have a crack at it.' And I said, 'If you guys don't like it, we'll stay with what you have.' But at the end of the day, I went to Jeff's house, his recording studio, and I wrote the lyrics in 30 minutes from scratch; I wrote the whole song in, like, a half an hour. And I just wrote it, said it, did it, sang it, and then I listened to it. And about a week later, I said, 'Hmmm… It's really good. A little negative. A little bit of crying in my beer.' The lyrics, to me, were too much, 'Oh, you loved me, you left me, you bitch,' that kind of stuff. So I kind of changed all that and tried to make it more upbeat and more hopeful lyric. I made some changes and I said, 'Let me know what you think, Jeff.' And I played it for George and everybody listened to the new version and they all loved it, and that was it."

DOKKEN's upcoming concert DVD, which is tentatively due in April, will reportedly feature footage from two of the Japanese shows — including Tokyo — as well as the band's Sioux Falls gig. The band also recorded two acoustic remakes of a couple of the old DOKKEN songs.

Don told the "The Classic Metal Show" that he didn't know "why it took a freaking year to do this — the whole live DVD. But we had almost two hours of just backstage, goofing around, on the train, going to Osaka, Nagoya, on the train, having fun backstage, screwing around," he said. "That took forever to edit. So on the new live DVD, there's gonna a lot of bonus footage — a lot of just candid, messing around, having fun. 'Cause, you know, George and Jeff hadn't been in DOKKEN for over 20 years."

Dokken admitted that he had "a good feeling and a bad feeling about" the release of a new song featuring DOKKEN's classic lineup. "Because I know — I know — that when this video hits the streets, it's gonna go viral. I already know that; it's obvious," he said. "The video's over the top; it's killer — great song. It's just like 'Paris Is Burning' meets 'In My Dreams'. It's catchy, it's classic sounding. George did an insane solo on it; the solo he did was really, really… I was really proud of George. He's shredding, but at the same time, it's very melodic. So the Catch-22 is it comes out, it's the old members, it's what we call the O.G., the original gangsters, but this is not my lineup I've had for 20 years. So I'm gonna go forward with the band I have now. This was a one-time thing in life, one-time shot, one song — that's it. And, of course, already the phone's ringing off the hook, people throwing money at us for a show with George and Jeff and Mick. But, as you know, Jeff's in FOREIGNER, George has a million projects going on — KXM and LYNCH MOB — and we all have our things going on. But I just have no reason or desire to return to that lineup. But, with the old saying, never say never."