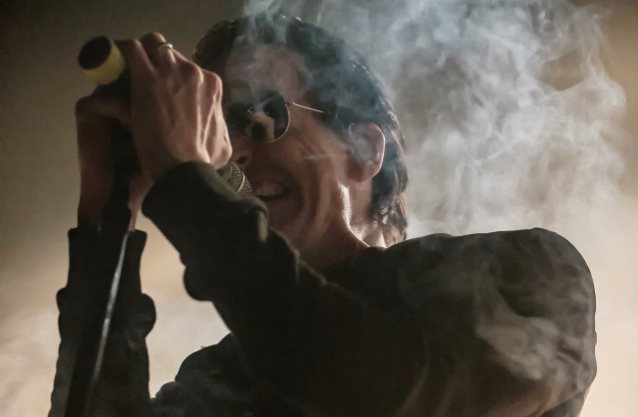 "Mother E", a brand new song from FILTER, can be streamed below. The track is taken from the band's seventh studio album, "Crazy Eyes", which will be released on April 8 via Wind-Up Records. The follow-up to 2013's "The Sun Comes Out Tonight" was produced by FILTER founder, singer and guitarist Richard Patrick.

"FILTER is the mind," exclaims Richard. "It's your interpretation or my interpretation. Our thing is to look at people's unexplainable behavior and assess it, using sound. It's a way to approximate the insanity of the human condition. The reason this record is so fucking heavy and strange is it's exactly the opposite of what's popular. It's not pretty. It's not cute. It's real."

Rather than partner with a producer, Richard took up the reins and oversaw the production side himself…

"You recognize it's us from my aggression and singing, but the instrumentation had to change," he admits. "It wasn't about just stacking guitars like we might've done on the last couple of records. There are way more electronics and sound design used."

The first single, "Take Me To Heaven", rides a pulse-pounding gallop into an entrancing and ponderous refrain.

"I was looking into the eyes of my father when he was passing away, and I held his hand," Richard recalls. "He glanced at me really quickly, focused on me, had this look of gratitude, and then he slipped away. I was almost like, 'I hope you're going to heaven'. Scientifically, the idea doesn't make any sense to me, but if there is a heaven, take me there. That's what happened."

Ultimately, it all comes back to the fact that Richard remains honest.

"I'm completely into this for the music," he concludes. "Being yourself is the most important thing. I authentically went to places I'd never gone before. That was from my heart. I'm trying to be as genuine as possible to what FILTER is. It's about sounding fucking different, forward and original."