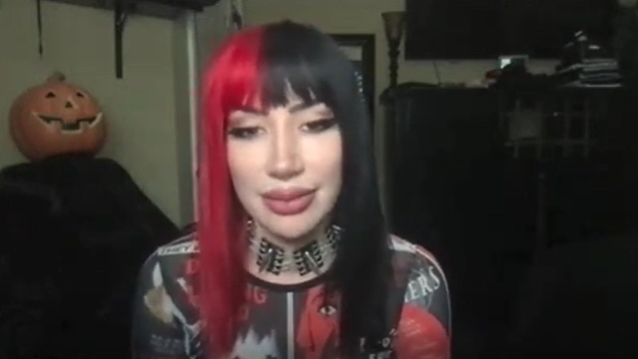 NEW YEARS DAY singer Ash Costello spoke to Terrie Carr of the Morristown, New Jersey radio station 105.5 WDHA about the progress of the songwriting sessions for the band's follow-up to 2019's "Unbreakable" album. She said (as transcribed by BLABBERMOUTH.NET): "We're about halfway through the [new] album right now.

"I'd been touring basically for six solid years hardcore straight — we're talking eight months out of the year; never home for my birthday; miss my mom all the time; miss my dogs. And I kind of took COVID as… I was relieved, honestly," she continued. "And I think I needed to rest and I needed to stop. And I'm not the kind of person that would ever do it on my own; I would need some sort of natural disaster to get me to actually stop and rest, which is what happened. So I took my time. I let life happen to me. And I got married. And so now I have nothing, romantic relationship-wise, to be angry about anymore, which is predominantly what used to inspire my songwriting. And so I tapped into something else that I never had before, and it was a positivity and a hopefulness that I was starting to feel reveal itself in me — finally, after so many years of just kind of surviving. Which is totally what I was doing — I was just on survival mode. And the music reflects that, especially on 'Unbreakable'. I look back and there's some guitar riffs on there where I definitely was expressing my unhappiness and my anger with those guitar riffs — particularly on a song called 'Unbreakable', because it's almost unlistenable, 'cause it's so heavy and ugly and angry. And so we've now switched to a really positive, happy, energetic, full-of-life sound. And I can't believe I even made it to this point in my life, let alone musically."

Costello previously talked about the upcoming NEW YEARS DAY album in an interview last month with Rock Sound. At the time she said: "We're not rushing it. We've just been kind of coasting through [it]. We've probably written about 30 songs; maybe seven have made the cut. So I'm being very picky — I'm being very, very, very picky on what I wanna put out there this time around, where before it was, like, 'Hurry up. Make a record and we can tour. Put out what you can.' Not this time. I'm really taking my time. And I'm in love with all the music. We've already chosen the next single and I cannot wait. I think it's even better [than the recently released 'Hurts Like Hell']. This one was like an introduction into what we're doing. The next one is, like, 'We're here. We're not going anywhere. This is the sound.'"

Elaborating on the songwriting process for the upcoming NEW YEARS DAY album, Ash said: "Jeremy Valentyne, who is now back in the band, has been a writer this whole time. He never really left the band completely; he just wasn't touring. So he helped write our 'Diary Of A Creep' EP [2018] and our 'Unbreakable' album, so we're continuing to write with Jeremy. And the same two producers I used on 'Unbreakable', which is Mitch Marlow, who's responsible for bands like IN THIS MOMENT, and Scott Stevens. Scott Stevens [has co-written with] DOROTHY, DIAMANTE, IN THIS MOMENT, SHINEDOWN, HALESTORM, LILITH CZAR. You name it — you name it, especially a woman in rock, he's helped her create the vision. So we're continuing on working with him."

Asked what she learned from the making of "Unbreakable" that she is applying to the new NEW YEARS DAY material, Ash said: "I feel like 'Unbreakable' was the first time I really was daring. Songs like 'Unbreakable' where I said, 'I wanna make a guitar riff that's unlistenable. I want it to be so ugly and terrible sounding that it's just enough where you can kind of fathom it.' And so I felt like we experimented a lot with that sound. And then I feel like with 'Shut Up' where we had experimented with a more pop sound — not pop-rock, but a pop element and then giving it a rock twist. So it's gonna be a lot more of that on this record. So we're going way heavy and way pop all at the same time. It's hard to walk the fine line, but when you nail it, it's very rewarding, I think."

The official music video for "Hurts Like Hell" was directed by Robyn August, who has previously worked with NOTHING MORE, Snoop Dogg and Pitbull.

Costello previously stated about the track: "'Hurts Like Hell' might seem like a song about a relationship on the surface; in a way, it is, I suppose.

NEW YEARS DAY will hit the road later this month as the support act for HALESTORM. A headlining run of shows will kick off on October 8 in Palmdale, California and run through October 23 in Jacksonville, North Carolina.