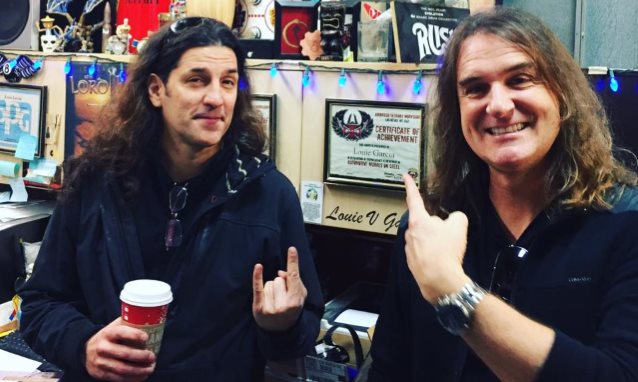 Describing ALTITUDES & ATTITUDE's musical direction as "just rock," Frank said that it's been "hard" for him and Ellefson to find the time to work on music for the project. "That's why we had to wait to put it out," he said. "We had to wait a long time, 'cause both of our bands are so busy — which is good. But there is downtime… When we start writing a record, there'll be downtime, and then it's that time for that."

The two bassists began writing music together while traveling the world during clinics now known as "Metal Masters".

"What started out as simple bass ideas quickly developed into some really great songs together," Ellefson said back in 2013.

"Our fans would probably never suspect that a couple of metal bass players would have songs like these inside of us. It's exciting to write melody with diversity while still pushing the limits of lead-bass playing. Frank's singing, and both of us playing guitars and other instruments, gave us a whole new dimension for creative opportunities."

"We thought it would be cool to let fans hear something they wouldn't expect from us — which is what ALTITUDES & ATTITUDE is," added Bello.

Regarding how ALTITUDES & ATTITUDE came together, Ellefson told Guitar World: "We were doing bass clinics for our endorsement of Hartke bass amplification a few years back when the 'Big Four' were playing shows together. I just said to Frank, 'We should really write some of our own material we can play for these clinics. Something unique just for us.' So at Bass Player Live! at the Key Club in Hollywood, Frank got us talking to ANTHRAX producer Jay Ruston, who is also a bass player, and he got excited to get on board to record some songs for us. We agreed to do just a few songs we could release in EP format. This would make the workload easier with all of our schedules and even allow us to continue releasing more songs moving forward as well. Jay brought in Jeff Friedl on drums and even suggested Gus G. to play the solos I wanted to have on the track 'Here Again'."