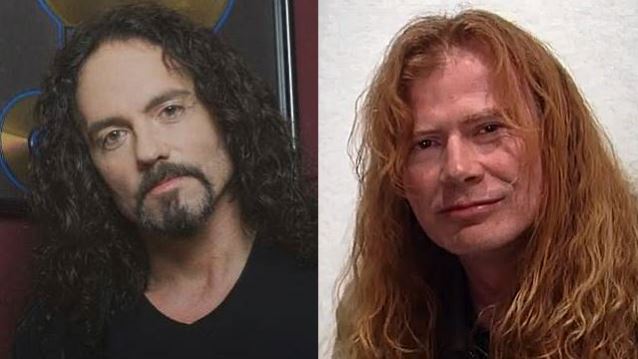 NICK MENZA To DAVE MUSTAINE: 'Quit Ripping Me Off'

Former MEGADETH drummer Nick Menza has accused the band's leader, Dave Mustaine, of "ripping [him] off" and has asked the guitarist/vocalist to "be a man and stop taking food from [his] kids' mouths.

In a new post on his Facebook page, Menza wrote: "To Dave Mustaine in regards to my publishing royalties. I find it very unprofessional that you conduct business like a child, quit playing games! be a man and stop taking food from my kids mouths. Its my earned money, Not yours. quit ripping me off. WTF?"

Menza recently revealed that he was involved in discussions with MEGADETH about rejoining the band following the departure of Shawn Drover. Nick told the "The Sick Room" podcast: "I went out there [to Dave Mustaine's studio] and jammed with [Mustaine and David Ellefson]. We played for, like, a weekend — like, three days — and on the third day, we were working on new songs. And everything was cool. They were telling me, 'You're back in the band. We'll do a press release.' And I'm, like, 'I don't wanna say anything until I have an agreement, a contract in writing of what's gonna happen.' And then they send me this ridiculous proposal stating that, 'You're not gonna paid anything until the touring starts.' So, basically, I was gonna work for nothing, doing the record. Which I was still kind of ready to bend in that direction anyway. But I'm, like, 'You know what?! I'm not gonna break or sell myself short with something that's gonna be huge. They've gotta realize the longevity of it.' And then they were kind of coming back at me the same way. So the whole thing was silly. I didn't even get a chance to negotiate with them about anything. They just put it off and said, 'That's it.' And I couldn't get hold of anybody."

MEGADETH has recruited LAMB OF GOD's Chris Adler to lay down the drum tracks for the band's fifteenth album, which is being recorded at Lattitude Studio South in Leiper's Fork, Tennessee.