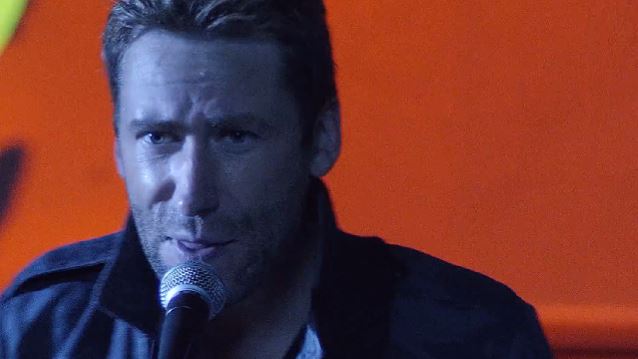 NICKELBACK Challenges Status Quo In 'Edge Of A Revolution' Video

NICKELBACK's video for the new single "Edge Of A Revolution" can be seen below. The track, which hit digital retailers on August 19, is taken from the Canadian act's eighth studio album, "No Fixed Address". The group's first release for its new label deal with Republic, a division of Universal Music, is due out this fall.

Says NICKELBACK guitarist Ryan Peake: "This was our second video with [director] Wayne Isham and we really enjoyed working with him. He really clicked with the concept and helped us fill in the gaps.

"The idea was to show that we don't have to accept things presented to us without question and that it's OK to challenge the status quo."

"No Fixed Address" is an 11-song set which includes such other songtitles as "Million Miles An Hour", "What Are You Waiting For?", "She Keeps Me Up", "The Hammer's Coming Down", "Satellite" and "She's Got Me Runnin' Round".

Although the new single is more politically oriented that previous NICKELBACK tunes, frontman Chad Kroeger told The Pulse Of Radio a while back that he wants the group's sound to be as diverse as possible. "I never want to be the band that has to write the one kind of song," he said. "I mean, we already get crucified for that enough. It's like, 'Well, they always write the, you know, the 'How You Remind Me's and this, that and the other thing.' And it's like, yeah, we like those melodic kinds of songs, but some of the heaviest material we've ever recorded got to be a single."

The new set will follow up 2011's platinum-selling "Here And Now". That album included the singles "Bottoms Up" and "This Means War".

NICKELBACK plans to hit the road in early 2015 for a lengthy world tour in support of the new record.