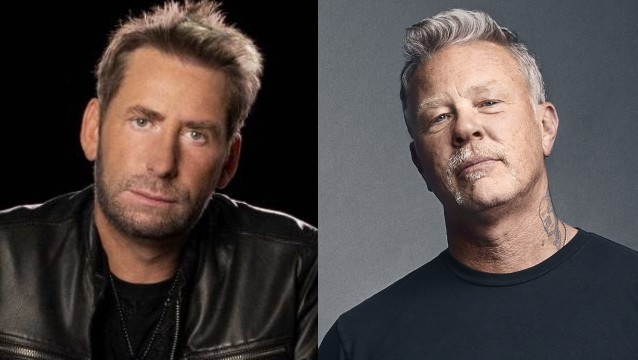 NICKELBACK's Chad Kroeger was the featured guest on BBC's "The Rock Show With Johnnie Walker" during the "Rock God" segment. Chad picked METALLICA's James Hetfield and stated about his choice: "I mean, have you seen METALLICA play? There's something about James live that just makes me wanna grit my teeth and scream along.

"I was lucky enough to be sidestage and see them play in Paris in front of 70 thousand people and then get a chance to go back and hang out with James afterwards. And he's not only talented — amazing singer, songwriter, guitar player — but he's also one of the sweetest people you could ever meet. So, that's gotta be my choice."

In a 2014 interview with Finland's Radio Nova, Chad said that his brother, NICKELBACK bassist Mike Kroeger, used to "hang out a lot" with Hetfield in Maui. He added: "And right when you think that you're the only one who gets it — the backlash — Mike's, like, 'Oh no. James pretty much thinks the entire world hates him.' I'm, like, 'Really?' Suddenly I don't feel so bad anymore."

Four years ago, footage of NICKELBACK covering METALLICA's "Sad But True" at the 2004 edition of the Rock Am Ring festival in Germany went viral after it was posted to a Facebook page where it was viewed more than four million times before being removed for copyright reasons. A YouTube version of the video was uploaded 10 years ago and has been viewed more than three million times.

A decade ago, Kroeger used METALLICA as an example of great songwriting. He told Men's Health magazine: "Music works on a lot of different levels. There's a lot of melody in a great metal song. If you listen to METALLICA songs, anything on 'Master Of Puppets' or '...And Justice For All', the songs move through these beautiful parts, and then they progress back into very aggressive territory, and the riffs are constantly changing and developing, and it stays very interesting."

Amassing hits for over two decades, NICKELBACK is the 11th best-selling musical act of all time, counting over 50 million units sold and over 4.7 billion career streams to date.

Named the "most successful rock back of the decade" by Billboard in 2009, NICKELBACK is one of the most commercially viable and important rock acts of the past two decades. The Canadian four-piece, comprised of Chad, Mike, Ryan Peake and Daniel Adair, is globally celebrated for its career-defining and award-winning hits, including "How You Remind Me", "Photograph", "Far Away" and "Rockstar", which all held top spots on the Billboard 100.