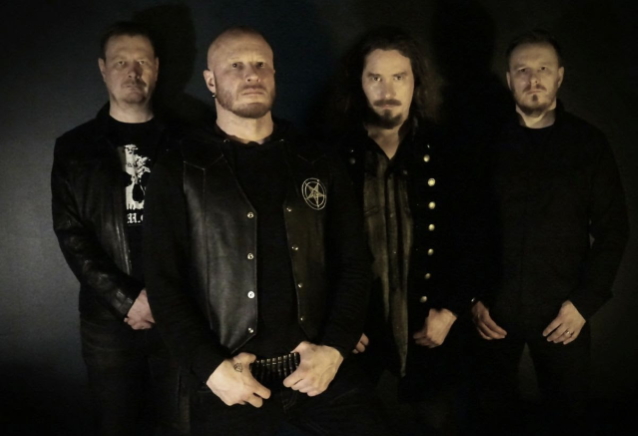 After 23 years of silence, Finnish cult black/epic metallers DARKWOODS MY BETROTHED, who feature in their ranks NIGHTWISH keyboardist Tuomas Holopainen, are making their long-awaited comeback with a new full-length album, "Angel Of Carnage Unleashed", to be released on November 12 via Napalm Records. The LP sets free a unique blend of brutal, fast-driven black metal and epic anthems in which eerie screams merge with heroic clean vocals, monumental choirs and majestic keyboards along with gory stories of famine, war, plague and the inescapable brutality of Finland's nature in the era of the Great Northern War (1700-1721). It features the old horde from the original 1993 lineup, now augmented by Holopainen as a full member of the band and Kai Hahto (also of NIGHTWISH) as session drummer.

Guitarist Jouni Mikkonen comments: "Tuomas was featured as a session keyboardist on all previous albums. This time he was fully on board from the moment we decided to make this album and hence it was natural for him to become a full band member. He also made a substantial contribution to the creative process."

Today marks an historic anniversary, as 300 years ago, on August 30, 1721, the Treaty of Uusikaupunki ended the Great Northern War and put the Angel of Carnage to rest. 300 years later, she will be unleashed again by DARKWOODS MY BETROTHED with the first evil-spitting single "In Evil, Sickness And In Grief", along with a vicious lyric video. Expect some of the fastest and most brutal black metal accompanied by epic melodies, choirs and majestic keyboards in trademark DARKWOODS MY BETROTHED style!

Watch the new lyric video for "In Evil, Sickness And In Grief" below.

DARKWOODS MY BETROTHED on the first single: "'In Evil, Sickness And In Grief' is our first new release since 1998. For the comeback after 23 years of silence, we chose a song that showcases everything that the band is about: murderous blastbeats, catchy riffs spiced with haunting melodies, vicious screams contrasted by clean vocals and choirs, majestic keyboards and eerily beautiful female vocals layers. These ingredients provide the musical canvas for a lyric that features a dialogue between a peasant soldier forcibly drafted to the Swedish army and the Slaughter's Holy Angel of War, who demands such horrific deeds from the soldier that he ends up with a shredded soul."

The new full-length contains eight songs written by the three musicians who founded the band in 1993: Pasi Kankkunen, Jouni Mikkonen and Teemu Kautonen (with substantial creative inputs from Holopainen). The lyrics are based on the human history of the Great Northern War of 1700-1721: how Finns experienced the many manifestations of the Angel of Carnage, sent by God to punish them for their sins.

Bassist Teemu Kautonen on the album: "The lyrics are based on the work of the renowned Finnish historian Teemu Keskisarja. His research inspired us both to carefully embed all lyrics in the appropriate historical context and to bring forth the human dimension by focusing on stories of individual people and how they experienced this perhaps darkest period of Finnish history."

Vocalist/guitarist Pasi Kankkunen adds: "It was very important for us to have the original lineup on the comeback album. We also agreed right at the beginning of the process to share the songwriting in equal proportions — just as we did on the 1996 classic album 'Autumn Roars Thunder'."

The album opener "Name The Dead" sets off with atmospheric organ tunes but leaves no scope for weakness, as only a few seconds later storming drums, aggressive riffs and raging growls set the stage for everything that is about to come: brutal soundscapes spliced with epic accents! The second track, "In Evil, Sickness And In Grief", pierces through the core with a poisoning vocal attack and contrasting operatic female background layers. "Murktide And Midnight Sun" marks folk and Viking reminiscence with its clean and catchy vocal presentation, grand choirs and mystic atmosphere, followed by the heavily stomping "You Bitter Source of Sorrow" and "Where We Dwell" with its haunting, all-consuming keyboard passages. "In Thrall to Ironskull's Heart" showcases the multifaceted character of DARKWOODS MY BETROTHED with an almost balladic start, which evolves into an uptempo, epic journey into the Battle of Napue (1714). The title of the penultimate track "Massacre" conveys the track's musical direction with precision: expect in-your-face blastbeats and gory lyrics. The final song, "Black Fog And Poison Wind", unleashes a sonic monster once more, combining aggression, haunting soundscapes and evil melodies, before "Angel Of Carnage Unleashed" ends with the tunes of a soundtrack-like outro. 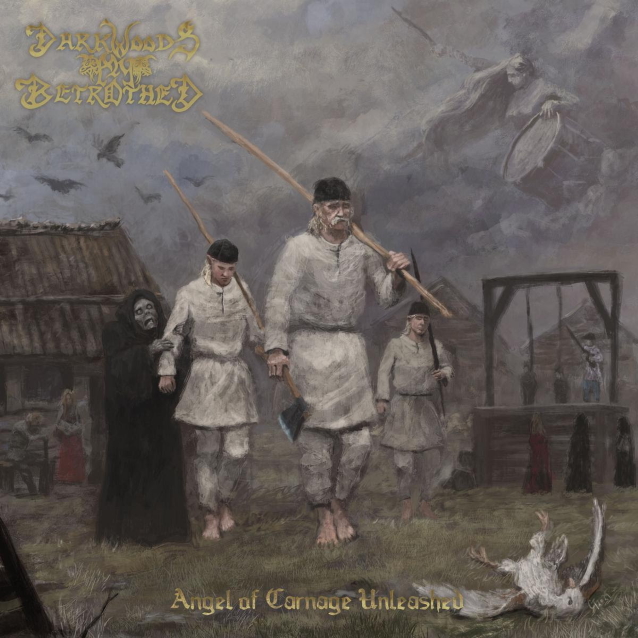