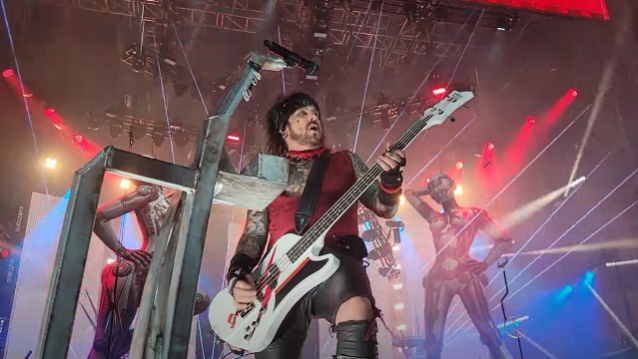 MÖTLEY CRÜE bassist Nikki Sixx has confirmed that there are plans for the band to play in other parts of the world following the completion of the North American leg of "The Stadium Tour".

On Saturday (August 20),Nikki took to his Twitter to lament the fact that there are only 10 shows left on MÖTLEY CRÜE's current run with DEF LEPPARD, POISON and JOAN JETT & THE BLACKHEARTS, saying it's "going way too fast." A short time later, fan asked Sixx "what's next" for the CRÜE and whether there will be dates elsewhere, including in Australia, to which Nikki replied: "We are working on SA-Mexico-Europe-UK-Asia- etc etc".

CRÜE's long-delayed North American trek was originally planned for 2020 and later moved to 2021 and then to 2022.

Two months ago, DEF LEPPARD guitarist Phil Collen told Chile's Radio Futuro that there are plans to bring the tour with MÖTLEY CRÜE to other parts of the world. "Definitely next summer is gonna be Europe," he said. "And then South America, Australia [and] Japan — next year, hopefully at some point, we'll be playing all of those markets."

In July 2021, Sixx told the 95.5 KLOS radio station that MÖTLEY CRÜE and DEF LEPPARD "might even drag" the same tour "to Europe, South America, Japan," but he cautioned, "We don't know yet. Right now it's a little far off. But us and DEF LEPPARD are super close; that's great. And we'll just see what version of 'The Stadium Tour' might fit for other countries, if we decide to go. Maybe it'll be the same lineup. I know people are super stoked for the lineup. It's a good outdoor fun party evening."

Earlier in the month, "The Stadium Tour" landed at No. 4 on Pollstar's LIVE75 chart, which ranks worldwide active tours by the average tickets sold for reported shows taken place over the last 30 days.

According to Pollstar, "The Stadium Tour" moved 98.5% of the available tickets from concerts at 17 venues in North American cities to average 36,763 sold seats per show. The bands also earned a $4.88 million gross average.

Three years ago, Sixx said that the Netflix biopic "The Dirt", about MÖTLEY CRÜE's formative years, sparked a renewed interest from younger fans who wanted to see them live, contributing to the band's decision to renege on its infamous "cessation of touring" contract.

We are working on SA-Mexico-Europe-UK-Asia- etc etc