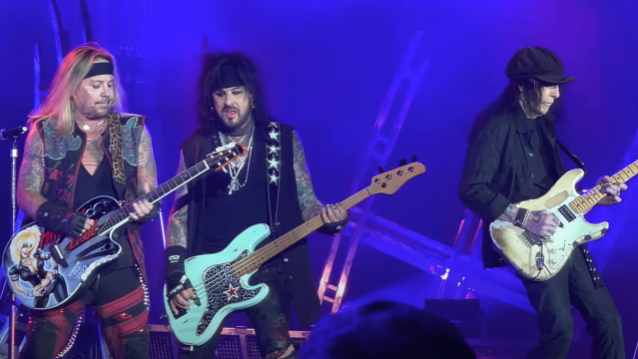 NIKKI SIXX Says MÖTLEY CRÜE's Unretirement Has Been 'Unbelievable': 'I'm So Grateful To Be Doing This'

MÖTLEY CRÜE bassist Nikki Sixx and drummer Tommy Lee spoke to Entertainment Tonight 's Kevin Frazier about what it has been like for them to return to the road as part of the band's recently completed stadium tour. The musicians announced the trek in 2019, just months after they supposedly noticed a massive surge in interest following the huge success of their Netflix biopic "The Dirt".

"It's been unbelievable," Sixx said. "I'm so grateful to be doing this, and it started, like, three years ago when the movie came out — two and a half years ago. We kind of, we broke up the band. We just decided to quit touring. We’ve been doing it for, god, 35 years at that point."

"And we were friends, and we were fine and everything's good," Sixx continued. "We're just like, 'No, it’s a lot of work.' When you see the show out there, you're gonna go, 'Wow.' I mean, it's years of work putting it together, and then they were like, 'No, not eight arenas, eight stadiums,' and I was like, 'Let me call Tommy.'"

"We're having a blast," Sixx said. "How can you say no to stadiums?" Lee agreed.

Sixx continued: "I mean, we're all having a blast, everyone's just having a good time...it's amazing to be 41 years together? I mean, sometimes it's just like, 'What?' Stepping into some sacred territory there."

Earlier this month, MÖTLEY CRÜE singer Vince Neil said the band will continue touring internationally with DEF LEPPARD in 2023, through Mexico and South America in the spring and soccer stadiums in Europe next summer. Plans are for MÖTLEY CRÜE to return to U.S. for more shows in 2024.