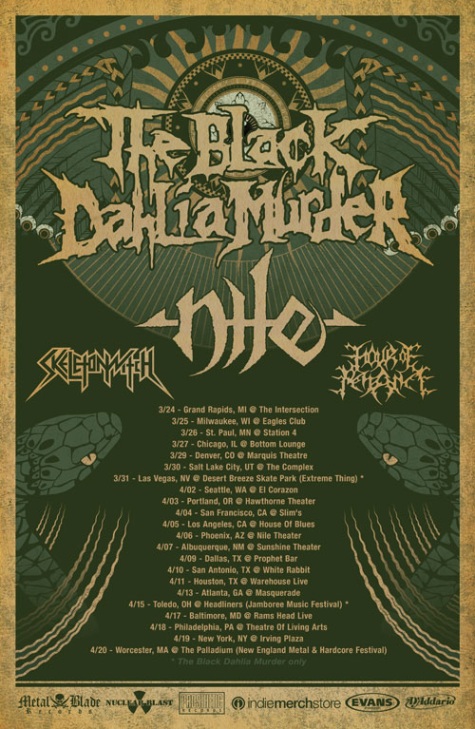 On April 5, Metal Warzone conducted an interview with NILE drummer George Kollias when the band played at the House Of Blues in West Hollywood, California as part of a North American tour with THE BLACK DAHLIA MURDER, SKELETONWITCH and HOUR OF PENANCE. You can now watch the chat below. The trek kicked off on March 24 in Grand Rapids, Michigan at The Intersection and will wrap on April 20 in Worcester, Massachusetts at the New England Metal & Hardcore Festival.

NILE has set "At The Gate Of Sethu" as the title of its new album, due in late spring/early summer via Nuclear Blast Records. The follow-up to 2009's "Those Whom The Gods Detest" was once again produced and mixed by Neil Kernon, who has previously worked with NEVERMORE, CANNIBAL CORPSE, QUEENSRŸCHE and DEICIDE, among many others. NILE's guitarist/vocalist Karl Sanders previously stated about the band's new material, "Some of the drumming on this record will be boggling people's minds for years to come."

"Those Whom The Gods Detest" sold 3,500 copies in the United States in its first week of release to debut at position No. 160 on The Billboard 200 chart. The CD landed at position No. 3 on the Top New Artist Albums (Heatseekers) chart, which lists the best-selling albums by new and developing artists, defined as those who have never appeared in the Top 100 of The Billboard 200.