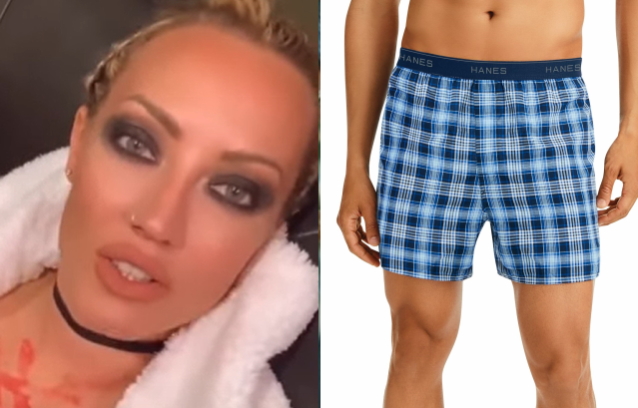 Nita Strauss, the Los Angeles-based guitar shredder for the ALICE COOPER band, has revealed that a fan "threw his sweaty post-show boxers" at her onstage during the legendary rocker's 2021 tour.

The 35-year-old Strauss, who has been a member of Cooper's backing group for the past eight years, first touched upon the provocative display of affection while commenting on a recent BLABBERMOUTH.NET article about a female SLIPKNOT fan throwing her bra onstage at a recent concert in Mexico. "Ok but who has video of the guy who threw his sweaty post show boxers at me on the last tour though", she wrote on the BLABBERMOUTH.NET Facebook page in response to the Taylor story. Her comment subsequently got more than a thousand "likes."

On Tuesday (July 5), Strauss decided to tell the full story of how the aforementioned Alice fan daringly tossed his undergarment on stage while she was performing with her bandmates on their summer/fall 2021 tour. Taking to her Instagram, she wrote: "Since my comment on a recent Blabbermouth Facebook post seems to be getting a lot of attention, I shall share the long version of the boxers on the stage story.

"The year was 2021. The city will remain nameless. Touring had just started back up post lockdown, and the band and fans were in a good mood. In the front row, around my side of the stage was a group of a few younger guys. They were having a ball. Singing the words, headbanging along, shaking their fists in the air and raising the horns at all the appropriate times. One of the guys in particular was trying to get my attention throughout the show, blowing kisses and making that heart-hands symbol every time I glanced in that direction. 'a bit much,' I mused, but I was happy to see people at a show having fun and didn't think much of it. 'Teenage Frankenstein' rolls around, the second to last song. I glance down. The guy is gone. Smart! Probably beating the traffic out of here. 'School's Out'. The guy is back. His friends are cracking up. I was wrapped up in the show and didn't notice something wadded up in one of his hands. 'No more pencils, no more booooooks…' Suddenly, a gray, sweaty UFO hurtled onto the stage and landed on the center riser, between me and Alice. We all immediately BURST into uncontrollable laughter. The guy's boxer briefs were brazenly laid out on the riser, showing ALL the after effects of being worn all day at a hot, outdoor August show. Mercifully, Chuck [Garric, bass] or maybe Ryan [Roxie, guitar] hooked the waistband of the boxers onto their headstock.

"Everyone knew which guy it came from. Chuck (or maybe Ryan) deftly lifted the undies up and flung them back in the guy's direction- but since headstock tossing is notoriously inaccurate- overshot the throw by a couple rows. As a result, an innocent bystander a few rows back who had his hands in the air and mouth wide open, probably screaming 'WELL WE GOT NO CLASS, and WE GOT NO PRINCI-' suddenly got a face full of front row guy's sweaty underwear. The 'AAAAGGHHHHHH' was audible over the concert noise and I think that was one of many times I actually fell down from laughing so hard. 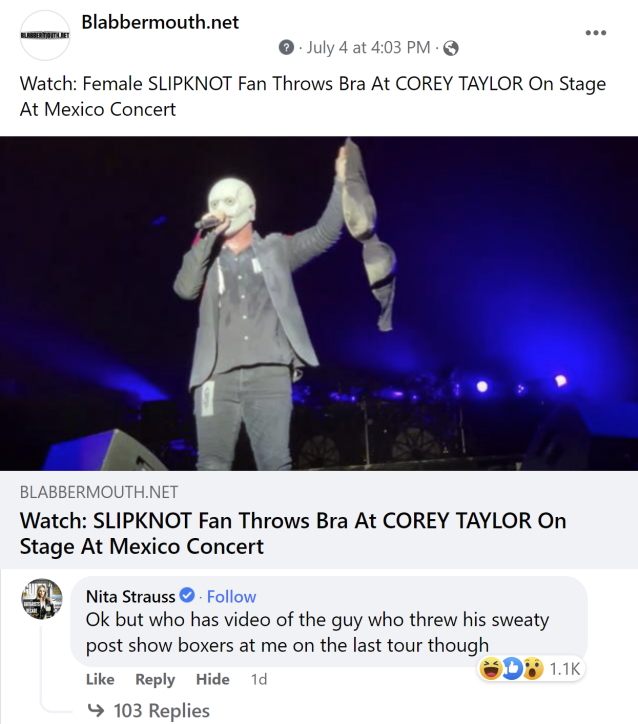