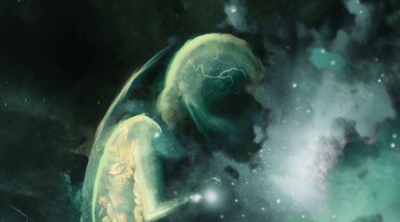 "Vortex Omnivium", a brand new song from the progressive death metal act OBSCURA, can be streamed on the band's MySpace and Facebook pages. The track comes off the band's new album, "Omnivium", which will be released in North America on March 29 on CD, double LP, and digitally via Relapse. Two versions of the "Omnivium" CD are available for pre-order now — the standard and limited deluxe version that comes in a digipak with exclusive bonus track, embroidered OBSCURA patch, guitar pick, and an "Omnivium" album cover sticker.

The "Omnivium" artwork was designed and laid out by Orion Landau (ORIGIN, DYING FETUS, ZEKE, DISFEAR) and can be viewed below.

"Omnivium" was recorded at Woodshed Studio in southern Germany with engineer V. Santura (TRIPTYKON, DARK FORTRESS). The album is based on Friedrich Schelling's "On Nature's Connection to the Spirit World".

Commented drummer Hannes Grossman: "The recording process was intense and time-consuming, but it brought us many steps forward as musicians both individually and collectively.

"The songs are still catchy, but there are more epic parts involved, as well as faster and more melodic songs. The extremes of the band's sound extend on all sides, so to say. Expect some things which have never been done before like this in death metal!"

OBSCURA will embark on a four-week European tour alongside HATE ETERNAL and BENEATH THE MASSACRE in late April.