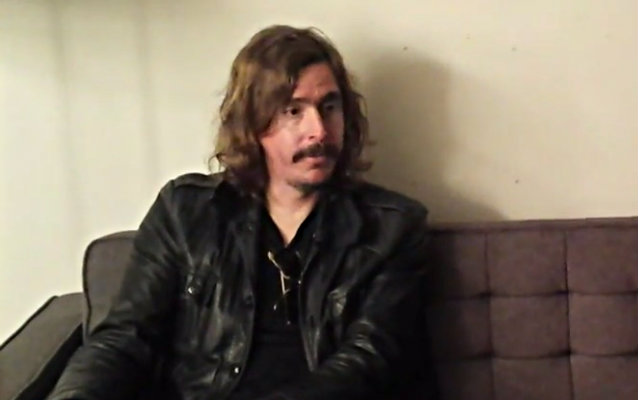 OPETH Frontman: I Would Hate For Our Music To Become Corrupted By Other Things

Metal Wani's Sandra Yeomans conducted an interview with guitarist/vocalist Mikael Åkerfeldt of Swedish progressive metallers OPETH on October 5 at Massey Hall in Toronto, Ontario, Canada. You can now watch the chat below. A couple of excerpts follow (transcribed by BLABBERMOUTH.NET).

On when he decided that OPETH had to take a different musical direction prior to the recording of 2011's "Heritage" album:

Mikael: "It wasn't so much of a decision; it was more of a result of the music, I guess. The music normally comes before there's a voice on there, and I try to adapt the type of vocal style to what the music sounds like. And if you do a ballad, it kind of makes sense that perhaps you shouldn't be screaming over it, unless you have some great idea what you're gonna do with it. But the songs came out like that. I did make an attempt to write heavy songs right before the 'Heritage' record, and I didn't feel it, if you know what I mean. So I scrapped those and went into the 'Heritage' thing. And everybody [in the band] was on the same page. It was great. It was time for us to do that. And I hadn't been a massive consumer of any really heavy contemporary music, and it felt a bit like… Ironically, a lot of people called us sellouts when we did the 'Heritage' record, but I actually felt like if we did another record like what we had done in the past, it would [have been] just to cater to the career that we had built up. At the end of the day, it doesn't matter so much what people call it. But it was so… I love music a lot, and I would hate for it to become corrupted by other things. So that's the thing that is most important to us — that we love what we're doing. And we didn't love the stuff that we wrote prior to 'Heritage' — meaning, not the record before 'Heritage'; I wrote stuff in between 'Watershed' and 'Heritage' that I just felt like, 'This is not it.' And once we came up with the songs for 'Heritage', it was, like, 'Yeah, this is cool. This is new and exciting.' And that's how it's been since."

On how the saturation of the heavy metal scene will affect the genre's future:

Mikael: "I think that type of… The metal scene being saturated, even if I think it's true, I don't think it's suffering at all from it. It goes in waves, it seems, or in circles. All of sudden, a retro sound is popular again and everybody's, like, 'This is so fucking cool,' because it sounds like BLACK SABBATH. Which I think is cool. Or the prog thing— you know, what's it called? The 'djent' thing. I don't know where it's going to go, but I believe it's probably gonna go in the direction where I don't necessarily would want to listen to, to be honest. I like the old… I'm always talking about old music, and you have to forgive me for that. I am very nostalgic about it. But I also think it was so much easier back in those days with the identities of bands — the bands that I grew up with — it was so easy to tell them apart. There was a lot of bands, but not as many as today."

OPETH's new album, "Sorceress", debuted at No. 24 on The Billboard 200, having shifted 16,000 equivalent album units in the week ending October 6.

"Sorceress" was released on September 30. For the band's first effort for Nuclear Blast via OPETH's imprint label Moderbolaget Records, the group returned to Rockfield Studios in Wales, also home to pivotal releases from QUEEN, RUSH and JUDAS PRIEST, where the Swedes had tracked "Pale Communion" in 2014 with Tom Dalgety. The band spent twelve days recording at the countryside venue among its serene and inspiring surroundings.