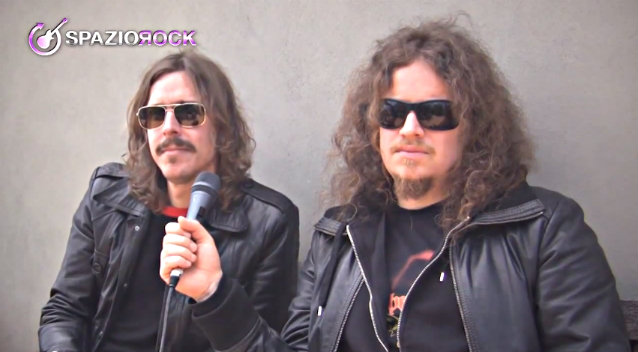 OPETH's MIKAEL ÅKERFELDT: 'We Still Feel That We Belong To The Metal Scene'

Italy's SpazioRock.it recently conducted an interview with Mikael Åkerfeldt and Fredrik Åkesson of Swedish progressive metallers OPETH. You can now watch the chat below. A couple of excerpts follow (transcribed by BLABBERMOUTH.NET).

On where OPETH stands in the metal scene today:

On whether metal fans have embraced OPETH's more recent albums:

Mikael: "The metal scene is… It's something I've been thinking about and talking about a lot, it's very hard for me to define what it is., really. I know that if you listen to brutal death metal, you might have a problem with what we're doing today. But that is not the definition of metal. I think the definition of metal is very blurry, and I'm not sure if you can define what metal is. But, like I said, that's our roots, so I feel that we still belong. I still feel many of our fans have probably made this type of journey with us. They've grown up. Maybe they listened to the same stuff that we did. Maybe it's easier for them to understand what we're doing now."

Mikael: "I think [doing 'Watershed'] was necessary [to bring us to this point]. I didn't have to struggle a lot to push us forward. Once I started writing for 'Heritage' for real, so to speak — because I did try and kind of latch on to the 'Watershed' style for some time, and then I just [went], 'Ah, fuck it. Let's do something new.' And then it was easy, if you know what I mean. And by doing 'Heritage', even if a lot of metal fans, so to speak, don't like that album, I think it gave us a future. I love that album. I think it's unique. We couldn't repeat it if we wanted to, but we can build on from it. It gives us a future. And I think we would stagnate if we tried to latch on to the sound that made us popular, so to speak. And I still think if you compare 'Heritage' and 'Pale Communion', you can only compare it to OPETH, I think. You can't compare it, really, to anything else. People are saying we're trying to sound like KING CRIMSON, but they don't really know what they're talking about, because it doesn't sound anything like KING CRIMSON. It's just an inspiration for us."