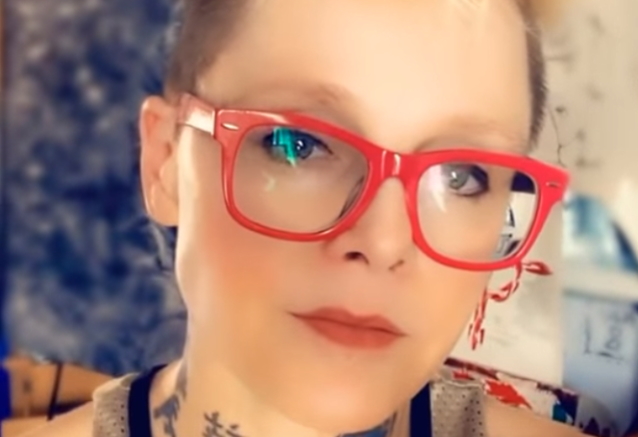 OTEP, the band led by singer, poet, illustrator, author and activist Otep Shamaya, is putting the finishing touches on its ninth album for a tentative early 2023 release. In a new interview with Radioactive MikeZ, host of the 96.7 KCAL-FM program "Wired In The Empire", Otep stated about the upcoming effort (as transcribed by BLABBERMOUTH.NET): "We've just finished mixing, and we're about to go into mastering. And then it's really up to the label to decide when they're gonna release it, what they're gonna release, which single they're gonna release. I have some say as to, you know, what I recommend, but ultimately it lies on them. So I'm hoping for… I always want a Christmas release; labels always fight me on that. But I always think that's when people have money."

She continued: "Most of my fans are working-class people, and I grew up poverty class, working class. I never forgot my roots, and I always try to think about that. So hopefully I'm gonna try again pushing for if not a late 2022 release, then maybe something early next year. … We're definitely pushing for that — me and the producer of the record, who I worked with him on 'Generation Doom', which was my seventh record, I believe."

Regarding the songwriting process for OTEP's new album, Shamaya said: "This record actually was written with a couple of different songwriters, which I was really excited to work with. 'Kult 45' was my last album, which is four years old now. It's insane to believe that it's been four years, but it has. When I went back in the studio, the band had sort of dispersed at that point — everybody was trying to make a living and trying to find other jobs — and so I just went to the producer and we sat down and we found some really, really talented, creative people. And even though I've been doing this for a long time and have accomplished a lot — at least I think I have — I really work best with mentors. I like people that are, I feel, creatively better than I am so that I can have this sort of spiritual intercourse between all of us where we're sort of sharing ideas and I'm inspiring them and they're inspiring me."

OTEP will celebrate the 20th anniversary of the band's 2002 debut studio album, "Sevas Tra", will a special concert on September 15 at the Whisky A Go Go in Hollywood, California. It will mark OTEP's first live performance in over three years.

Throughout the span of her career, Shamaya has been an undeniable force in bringing awareness via various acclaimed mediums to social and political injustices felt by various communities and subcultures. For years, publications such as Revolver magazine have lauded Shamaya for "following in the footsteps of outspoken musicians from folk singer Woody Guthrie to RAGE AGAINST THE MACHINE's Zach de la Rocha, dubbing her "one of music's catalysts for social change".

OTEP's latest album, the aforementioned "Kult 45", was released in 2018. The LP was recorded at The Lair in Los Angeles, completely utilizing the same equipment used for OTEP's first album, "Sevas Tra" (down to Shamaya's vocal microphone, a SHURE Beta 58),in order to create a sound reminiscent of their roots. "Kult 45" was produced by the band, with assistant engineering from Larry Goetz, Nicolas Schilke and Lizzy Ostro.