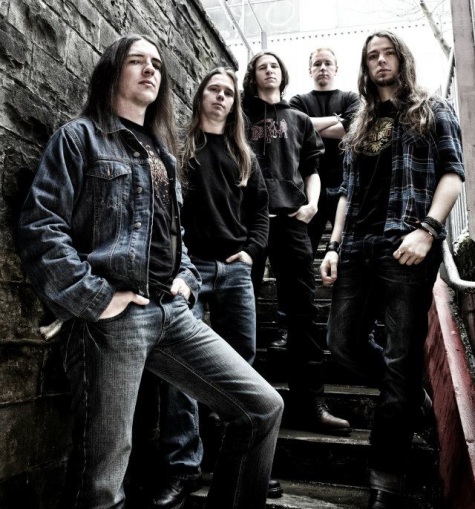 OVER YOUR THRESHOLD Signs With METAL BLADE RECORDS

Metal Blade Records has announced the signing of German progressive death metallers OVER YOUR THRESHOLD. The band's full-length debut, "Facticity", will be released on August 28 (one day earlier internationally).

Hailing from Munich, OVER YOUR THRESHOLD began playing live in 2007. After numerous gigs with renowned death metal acts like OBSCURA, DEADBORN and HOKUM, the band made a name for itself in the local metal scene. The band's first record, "Progress In Disbelief" (EP),was independently released in 2008.

Over the years, OVER YOUR THRESHOLD's brand of death metal evolved and currently includes a bit of thrash and some fusion components.

In 2011, OVER YOUR THRESHOLD entered Woodshed Studio in Landshut, Germany to record its first full-length album, entitled "Facticity". The sound of "Facticity" is not only more blasting but also more technical, interspersed with energetic death metal riffing as well as melodic acoustic guitars. It's enriched by brute-force blast beats, thrash metal, jazzy harmonics and the distinct tones of smooth, fretless bass. Furthermore, the band recruited guest musicians Steffen Kummerer (OBSCURA, THULCANDRA) and Jonas Fischer (HOKUM, ex-OBSCURA) to jazz up the effort, which was mixed and mastered by V. Santura (TRIPTYKON, DARK FORTRESS).

Commented OVER YOUR THRESHOLD: "Metal Blade Records ranges among the highest renowned labels for extreme metal music and we are very glad about the possibility to release our upcoming debut album, 'Facticity', via such a strong partner. We are looking forward to work with Metal Blade and the future development!"

OVER YOUR THRESHOLD is: