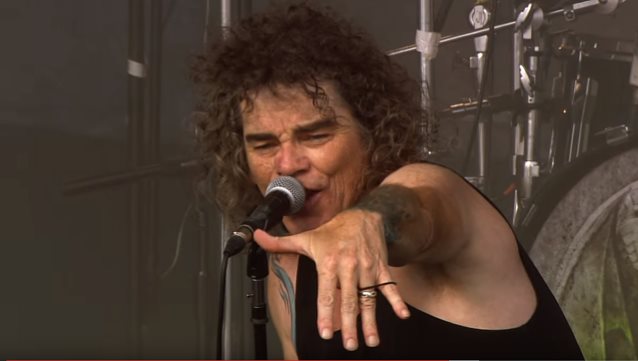 OVERKILL frontman Bobby "Blitz" Ellsworth spoke to Brian Aberback of Patch.com about the band's decision to title its forthcoming album "Grinding Wheel". Blitz said: "When we were looking for a title, when you think in terms of the word 'grind,' you think of something that is relentless and doesn't wear down, whether it be an old stone mill or something metallic where sparks are flying through it. It's about an all-purpose tool through all time. It's a good, quality OVERKILL record."

Blitz also talked about OVERKILL's longevity and why the band continues to make albums more than thirty years into the group's recording career. He said: "When it first happens, getting a record deal and going on tour, you're just happy to get anything. But to have longevity, you have to separate the passion of what it's all about and what the business is.

"I think somewhere in the early '90s, when we saw everything changing, that the grunge stuff was coming in, that there was much less interest from the major labels, we had to start reinventing ourselves. Not musically, but with regards to business, and search out the right deals and the right gigs."

He continued: "We took on self-management. I think that's when I realized, 'Hey, this is actually sustainable.' Maybe that's part of the [New] Jersey hard-work thing. You think, 'There's always a way. Let's figure this thing out.'

"We had the experience to self-manage. We were brought up under good wings. There's the passionate side of being a kid in a metal band and you have to keep that throughout your entire career. You have to think that somewhere inside you, even in your 50s, you're 19 again. But there's another side of yourself that realizes you've got to balance the books."

"Grinding Wheel" is tentatively due in early November via Nuclear Blast. Ellsworth told Alternative Nation about the follow-up to 2014's "White Devil Armory": "At the end of the day, OVERKILL is OVERKILL. Our trademark is that we are always recognizable on every release. For the three decades we have been around, we were always OVERKILL. So, sure, it is a metal record, and like always, it will have sort of a thrash vibe to it with some melody in it."