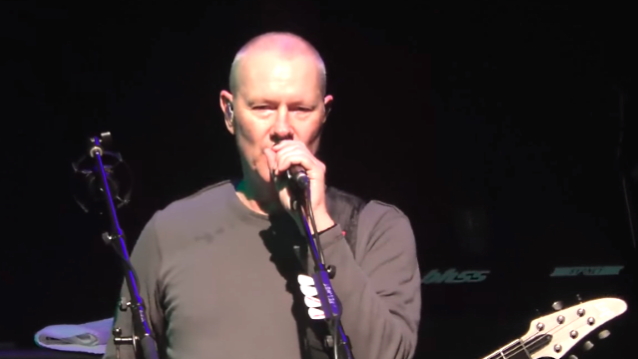 In a new interview with Machine Music, HELMET leader Page Hamilton discussed his relationship with PANTERA in the early 1990s and his band's influence on what eventually became the Philip Anselmo-fronted act's "Vulgar Display Of Power" album.

"If you look at what they were doing before they 'became' PANTERA – the music wasn't interesting to me," Page admitted. "They were good players, but they hadn't found their voice yet. And I saw them play, they were opening for PRONG in Minneapolis; we were opening for THE MELVINS. And I saw MIND OVER FOUR and they were okay, and then I saw PANTERA, and I was, like, 'There's something there. That's a good fucking band.' And I was kind of blown away. They were playing [songs] from 'Cowboys From Hell'. Well, then they came in and watched us and I said something on mic, like, 'Guys, I don't know if you saw that band PANTERA, but that was really incredible.' And that was not our crowd, that was not that Amphetamine Reptile, Lower East Side New York crowd, but I didn't give a shit. I never wanted to be a part of some club anyway — because we didn't really fit in. We weren't indie; we weren't metal. But I saw PANTERA and went, 'That's the fucking real deal.' And then I heard somebody say, 'Thanks!' and I looked down and the band was standing in front of me.

"Long story short, we got to Dallas six months later and they had hooked up with us and started playing parts of what would be 'Vulgar Display Of Power' to us, which is their HELMET album," Page continued. "They had this ability already, but they had to discover their voice. They had started to discover it with 'Cowboys From Hell', but by the time they had heard HELMET, it was just there. And Dime [PANTERA guitarist 'Dimebag' Darrell Abbott] had told me, he said, I told you you were going to influence me.' And I was flattered, because that guy could play. nd I get that it's a process, a learning process, even for great musicians."

Later in the chat, Hamilton circled back to the time when PANTERA came to see HELMET perform in Dallas.

"They played us some songs from 'Vulgar Display Of Power' in the parking lot," he recalled. "[We were] at the parking lot, drinking beers before the HELMET show and they're playing us this album that they were working on. I remember we had started our song 'Distracted', off of 'Strap it On', and Phil [Anselmo, PANTERA singer] was right in front of me, and I remember all of their faces lit up when they caught the groove. Like they were waiting going, 'What the fuck is this?' and then went wild once they caught the groove. I love those moments where there's this revelation, like, 'I don't know what is this, but it feels so good. Why does it feel so good?'"