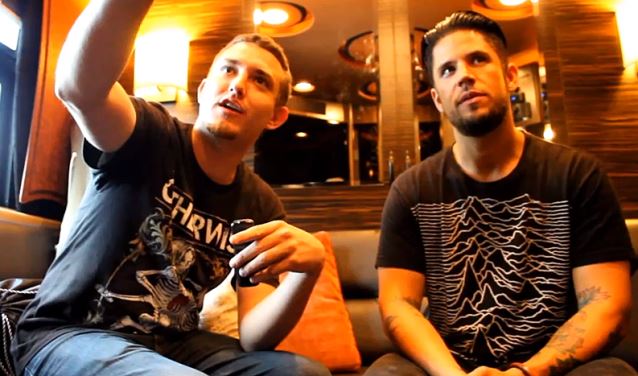 On August 17, The Front Row Report conducted an interview with bassist Tobin Esperance of Californian rockers PAPA ROACH at the Cincinnati, Ohio stop of the "Carnival Of Madness" tour. You can now watch the chat below.

PAPA ROACH's latest album, "The Connection", was re-released in Europe as a special tour edition on May 6 via Eleven Seven Music. The effort contains a bonus DVD of a concert at Club Nokia in Los Angeles featuring performances of new songs as well as the band's biggest hits, including "Still Swingin'", "Give Me Back My Life", "Before I Die", "Last Resort" and "Between Angels & Insects".

"The Connection" was produced by rock veteran James Michael (SIXX: A.M., HALESTORM) and John Feldmann (PANIC AT THE DISCO, THE USED, BLACK VEIL BRIDES). The CD sold 22,000 copies in its first week of release to debut at No. 17 on the Billboard album chart.

"This record is a snapshot of me at my most desperate," vocalist Jacoby Shaddix told The Aquarian Weekly. "As I was writing this record, [my wife and I] were split, so there was a lot of pain and anger and frustration. As the dust settles in my life, I realize that I'm the orchestrator of all this chaos. I'm the one at fault. I'm the fucking problem. When you go through that stuff, sometimes it's hard to own your own shit, to step up to the plate and own it. I just had to because I wanted to do the right thing."

He added: "I was able to make this record, express myself and get my family back together and get my respect from my band. At the eleventh hour, I pulled it off. I don't know, man, this is a repeating cycle in my life. I don't know how many more times I can do this to myself."