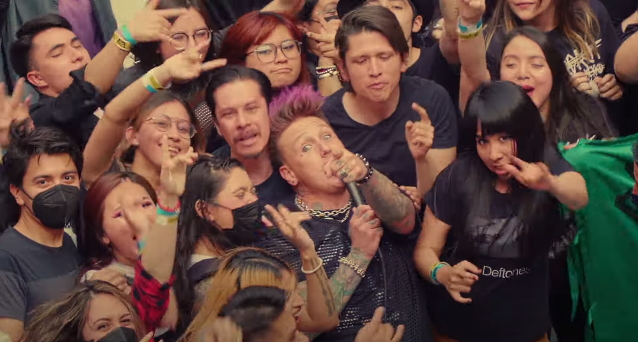 California rockers PAPA ROACH have released the official music video for the title track of their latest album, "Ego Trip". The LP came out in April via New Noize Records in partnership with ADA Worldwide (WMG's independent label and artist services arm).

PAPA ROACH stated about the Bryson Roatch-directed "Ego Trip" clip: "We visited the legendary House Of Vans in Mexico City earlier this year and invited fans to come get crazy with us on a day off to film the video for the title song on the 'Ego Trip' album. The energy was truly inspiring to everyone! Thank you, Mexico. We love you! Viva La Cucaracha".

PAPA ROACH and FALLING IN REVERSE recently announced the second leg of the "Rockzilla" tour, featuring special guest HOLLYWOOD UNDEAD and opener ESCAPE THE FATE. The trek will kick off in Rochester, New York on February 1 and will include stops in 21 cities across the U.S.

PAPA ROACH will be traveling abroad next year for a string of U.K. dates with DON BROCO and DANCE GAVIN DANCE, followed by summer festival appearances in Europe with more set to be announced.

After two years of work and nearly 10 months of building up excitement with fans, PAPA ROACH recently celebrated the release of their eleventh studio album, "Ego Trip". An album that sprouted almost by mistake in the throes of a global lockdown, its seeds were planted when the quartet entered a COVID-secure mansion in Temecula, California in the summer of 2020. What started as an escape and an exercise in keeping the creative juices flowing, in a world that had completely ground to a halt, quickly grew into something bigger. Purposeful, provocative, and just the right side of the line between confident and cocky ("I really hope [the album title] stops a few people in their tracks," cackles Shaddix),"Ego Trip" is PAPA ROACH — completed by guitarist Jerry Horton, bassist Tobin Esperance and drummer Tony Palermo — at its boldest and most brilliant.

PAPA ROACH are two-time Grammy-nominated, platinum-selling leaders in alternative hard rock music, who in 2020 celebrated the 20th anniversary of their iconic album "Infest". 20 years into their career, the band continue to have global success.