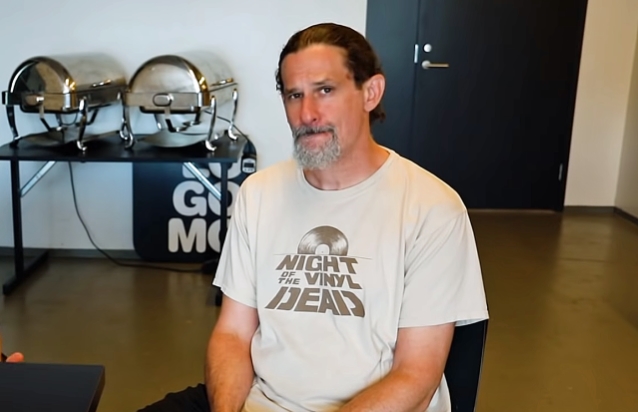 On what has kept CANNIBAL CORPSE going for over 30 years:

Paul: "I think we're doing what we've been doing since day one, and we're just kind of getting better at our craft as we go, I think. We're becoming better songwriters, better musicians. Maybe, overall, just experience and you're older, you hopefully gain some wisdom in that way. It is bucking the odds, for the most part, 'cause usually a band 30 years in isn't producing their best material. We've been hearing this from a lot of people, when we put 'Red Before Black' out, that this is arguably our best stuff — it really is. Of course, as the band, you always say, 'Oh, it's our last release, it's our best stuff,' that cliché thing, but, man, I really think this is some of the best songs we've ever created. We've got some really catchy stuff. It's a mix of everything CANNIBAL — it's catchy, it's brutal, it's heavy, it's fast, it's slow; you've got everything. But, man, for some reason, we just hit the nail on the head right with the songwriting. And we try to achieve that every time. It's not like we go into the writing process, 'Oh, what are we gonna do?' No — we're always prepared. We're ready to go. We're ready to create. Under those given circumstances, too, we always do a record within six to eight months. It's never like we've sat around going, 'We've got years to create.' We know we don't. The band has always been constantly on the move. If we're not writing and recording, we're touring. So the fact that we do it when we're supposed to is kind of a crazy thing, too, because, yeah, some people may not be able to create that way: 'Oh, I'm not feeling it.' It maybe takes them years — who knows? When we're able to pull it out when we're able to and when we have to, and for some reason or another, exactly, it just seems to be getting better. It's hard to explain, other than we just love doing it. It's inside us. Like I said, I think we always do great. And maybe certain albums, you've got one or two songs that come out of it and we have — every album that comes out, there's gonna be those one or two, that, 'Hey, that's a fan favorite. That's gonna be in the setlist.' But yeah, for this one, man, it's, like, 'That one and that one and that one. Let's play this. Let's play half the album. Let's play more if we can.' Because we're really excited about this material. Life's too short, all those kind of things. We're not ready to call it a day. You've just got to keep striving to be the best you can be. And I'm doing that particularly in my drumming, and I think that's known too. If you're listening to what I did on, say, 'Red Before Black' and you listen maybe a few albums ago, you'll go, 'Man, Paul seems to have stepped it up a little. Something's going on.' Well, I have. I really have taken a little more of an effort to do better. And, like I said, it's not like we never did that in the past, but I don't know — maybe it's because you're getting older and you just go, 'Hey, time's of the essence. Maybe tomorrow it will be over.' You don't know. So I think we just wanna do the best we can. And I've been doing a lot, on my own personally, to make myself better in any way possible. Of course, with the drumming, but if I'm eating better, if I'm working out a little bit more — just doing those little things that maybe I didn't do five years ago. And I noticed the difference in that. So that's good. But, yeah, it's crazy. Thirty years in and we're writing arguably our best stuff. It's pretty amazing."

On which CANNIBAL CORPSE album he's most proud of:

Paul: "That's a tough one, 'cause, obviously, you're proud of all your records. I mean, the most special is gonna be your first album. How could 'Eaten Back To Life' not be our most special album? It's the first album — it's the first time you're going into a studio and you're getting your album and your CD. 'Wow, I can't believe we have an album out, a CD.' And I think it's a great album. It's a raw, pure album — as pure and raw as you can be, I think, for CANNIBAL CORPSE. And you look back and you go, 'Wow, we created those songs so quick and we recorded so quick.' Everything happened so… not really spontaneous, but I guess just the quickness of everything. You're recording for ten days as opposed to being in there for two months or whatever now. But, yeah, just the fact it's your first album, that's always just gonna be the most special. Is it the best? I don't know if it's my favorite overall. I love 'The Bleeding' — another one that maybe we hit the nail on the head with the songwriting at that era. So when you listen to 'The Bleeding' songs, you're, like, 'Wow, man. Yeah, these songs are really good songs. We crafted some good songs.' So I'm happy for that. I do like 'Kill' a lot. I think 'Kill' is another kind of a transitional album for us. For some reason, the songwriting seemed to take a little bit of a step up from, say, 'The Wretched Spawn' or 'Gore Obsessed'. And then 'Kill' just had some really good ones on there that you're, like, 'Wow, man.' A very powerful album. I like 'Torture' a lot as well; 'Torture' is a good album. As I said, I'll sit here and probably just name all 13 prior to 'Red Before Black', because they're all very special to us. But, yeah, I would say maybe those four, of course, in particular."

On being a part of the Florida death metal scene that also spawned DEATH, DEICIDE, MORBID ANGEL and OBITUARY:

Paul: "It was totally a coincidence, 'cause we're from Buffalo. We started in Buffalo, New York, which is completely not even close to the south. We just get lumped in there because we moved down there only seven years into our career. Now we've been based there since then, so everybody [thinks] we're [from] Tampa. Well, yeah, we're Tampa-based, but we're Buffalo-born — an original band from Buffalo, New York. So we've got more in common with bands like SUFFOCATION and IMMOLATION and those kind of bands, because we had that northern thing. It was a pure coincidence, really, I believe, that these bands happened to be down in the Tampa area, the Florida area. Why? Who knows why? I don't know. And Morrisound [Recording] ties it together, 'cause everyone wants to use Morrisound, so everyone was looking at Tampa as the death metal capital back then. And it just so happens, I guess, because you have these big bands at that time that were living there. Really, the only band, I think, that's technically from Florida, in a sense, would be OBITUARY. MORBID are implants. DEICIDE were implants — everyone was implants. And then they happened to do well there, and the bands formed and you get popular. So I think OBITUARY might be the only ones that were really actually born and raised [in] Tampa. I could be wrong; I don't wanna say the wrong thing. But I truly look back at it to be just coincidental."

CANNIBAL CORPSE will embark on a U.S. tour with HATE ETERNAL and HARM's WAY in support. The tour kicks off November 2 in Columbia, South Carolina and wraps December 6 in Fort Lauderdale, Florida.