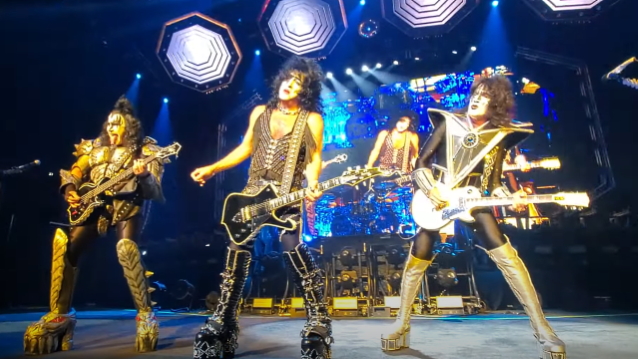 "We're coming to the end of this [farewell tour], so to speak. We pretty much know when we're ending and where we're ending. And that's it."

Stanley also touched upon the fact that the "End Of The Road" tour was originally scheduled to conclude on July 17, 2021 in New York City but has since been extended to at least late 2023. The trek was announced in September 2018 following a KISS performance of the band's classic song "Detroit Rock City" on "America's Got Talent".

"This tour, interestingly, seems to go on forever," Paul said. "That's because we lost two years to COVID. People go, 'Oh my God. This tour…' Well, yeah, there's two years that didn't count. And it's a big world. So, there've been some countries that I thought we were finished with, and the fans and the promoters wanted us to come back. So we have shows to do.

"The end is in sight — more so than some people know," Stanley confirmed. "But we'll have an announcement about that in the not-too-distant future."

Asked if the KISS farewell tour will end with the band's July 15 performance in Norway, which is the last listed tour date on the official KISS web site, Paul said, "It would only make sense for us to play the States, and I think it would make sense that we would end where we started," strongly hinting that the final concert will take place in New York City.

As for whether he thinks it will be emotional for him to play the final KISS show, Paul said: "More so than I know. There's gonna be some tears shed, for sure.

"You've gotta remember that Gene [Simmons, KISS bassist/vocalist] and I started this together when I was 17 and he was 20, 21. It's 50 years later. We've lived pretty interesting lives, and we have families and children and huge sales in terms of albums and concerts. So it's a big part of who we are; it's a big part of our lives. So, that final show, yeah, that's momentous. And it's gonna hit harder than I think we know. And we know it's gonna hit hard."

Asked whether the last concert of KISS's "End Of The Road" tour will truly mark the band's final performance or if there is a chance of one-off shows or a Las Vegas residency in the future, Stanley said: "I really can't say. But it is the last of any kind of regular shows or touring.

"It's just time," he explained. "And in the same way, it's time consuming. And physically, it's grueling to do what we do. Hell, if I could go out on stage in my jeans and a t-shirt, give us another 10, 15 years easily. But what we do is a whole different sport. I mean, we're athletes; we're running around on stage with 30, 40, pounds of gear, and it's not possible to do it that much longer. So we're not like other bands.

"So, will we do more shows or one-offs? I really have no idea," Paul admitted. "But this is a real clear mindset that the touring days and doing those kind of shows, that's over."

Formed in 1973 by Stanley, Simmons, Peter Criss and Ace Frehley, KISS staged its first "farewell" tour in 2000, the last to feature the group's original lineup.