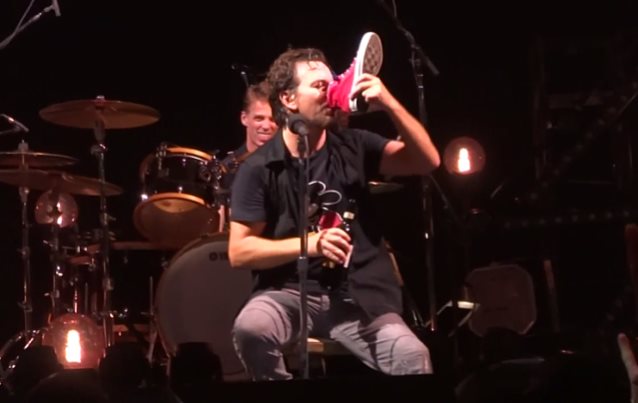 While PEARL JAM was performing a three-hour set Saturday night (June 28) at Friends Arena in Stockholm, a girl held up a sign saying "Please sign my shoe." Vedder told the crowd about the sign and said, "You picked the wrong guy." After the audience started chanting, "Sign the shoe! Sign the shoe!" Vedder had the fan throw her shoes up on stage and he then tossed them towards the back of the stage and joked that she shouldn't have trusted him. He ended by telling her to "just breathe" as he started playing the acoustic song of the same title. When the track ended, he signed the shoe and the security gave it to the girl in the audience along with a bottle of wine that she finished as the crowd cheered her on. Vedder opened another bottle of wine and said, "Okay, I'm gonna do you one better. I trust you." He then filled the other Converse shoe with wine and drank all of it before throwing the shoe back to her. The crowd was ecstatic.

Fan-filmed video footage of Vedder's wine-drinking stunt can be seen below.

Vedder and the rest of PEARL JAM are touring Europe until July and will be back on the road in the U.S. this October to promote their new album, "Lightning Bolt".

PEARL JAM turned some heads earlier this month in Milan, Italy when the band performed a snippet from "Let It Go", the smash hit from the animated Disney movie "Frozen". The track was reportedly a request from Vedder's five-year-old daughter.