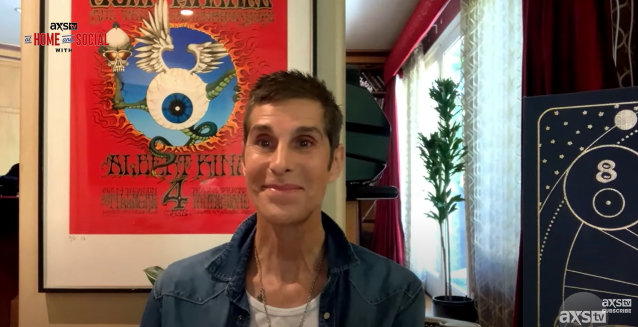 Asked if JANE'S ADDICTION is working on any music at the moment, Perry said: "Well, I can't speak for everybody, but I'll speak for myself… Personally, I've been making music — I mean, I make music through the week. I have plans to release a track a month.

"I love the guys in JANE'S ADDICTION and I wanna record with them," he continued. "But I don't know what their plans are. But I'll talk to 'em about it.

"These days, it's a little bit different. We — meaning us older guys that are established now — there's not really a need to come out with albums. Although maybe one more album before I die would be awesome, with JANE'S. And I think we can do it too. I would like to be prolific for the next five years, I think. Then I'll be able to take a vacation.

"I call 'em up from time to time, [and I tell them], 'I've got this track, man.' But they're not ready," Perry added. "So I give it off to [my solo project] KIND HEAVEN ORCHESTRA."

JANE'S ADDICTION has a couple of festival appearances scheduled for September: BeachLife Festival in Redondo Beach, Caifornia on September 10 and Louder Than Life in Louisville, Lentucky on September 24.

"We've got so much JANE'S material in the can," he explained. "We'll be releasing a couple of tracks, maybe writing some new ones."

Last August, JANE'S ADDICTION played two songs during Lollapalooza's Lolla2020 livestream, a free four-night broadcast event which took place on the original dates of the Chicago-based festival. Farrell, guitarist Dave Navarro, drummer Stephen Perkins and bassist Chris Chaney reunited for their first public appearance in three years to perform "I Would For You" and "Stop!"