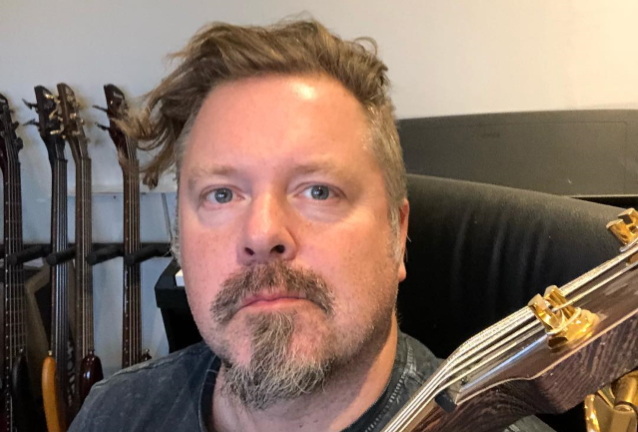 PETER IWERS Has 'No Regrets' About Leaving IN FLAMES

During a recent appearance on "Vox&Hops", the podcast hosted by Matt McGachy, frontman of extreme metal band CRYPTOPSY, Peter Iwers, who runs a brewery called Odd Island Brewing with his ex-IN FLAMES bandmate Daniel Svensson and owns the Gothenburg restaurant 2112 with IN FLAMES guitarist Björn Gelotte, was asked if he ever misses being on the road. The bassist replied (see video below): "Yeah, absolutely. Well, 'miss' is kind of the wrong word. I loved being on the road for most of the years that I was with [IN FLAMES], and I miss the good times. I have no regrets as far as leaving, but, of course, sometimes I really miss just being free and out and playing shows and traveling to new places every day. But I have plans. Maybe this will happen again in the future — not with IN FLAMES, though, but, yeah, we'll see."

Iwers left IN FLAMES in November 2016, saying in a statement that he was exiting the group "to pursue other endeavors."

In a 2017 interview with Ireland's Overdrive, Björn said that he wasn't surprised by Peter's departure from IN FLAMES. "It wasn't a 'shock,' so to speak, as we kind of knew that it was coming," he said. "I think he was just done with it all and not happy. No, 'happy' is the wrong word. He just wanted to pursue other things. Peter is a very, very busy guy. He has his own brewery with Daniel called Odd Island Brewing and he's also got four or five different musical projects happening, so he's really got his hands full at the moment."

Shortly after leaving IN FLAMES, Iwers joined CYHRA, the band featuring vocalist Jake E (ex-AMARANTHE) and guitarist Jesper Strömblad (ex-IN FLAMES). He announced his departure from that band in May 2018.

IN FLAMES' current lineup features American bassist Bryce Paul Newman, who has been playing most of the shows with the group since Iwers's exit.