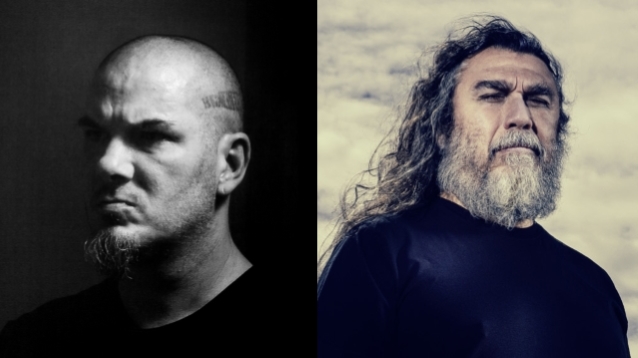 PHILIP ANSELMO On SLAYER Calling It Quits: 'I Don't Think You Can Walk Away From SLAYER Forever'

Philip Anselmo spoke to Chile's Humo Negro about his upcoming support slot on SLAYER's "The Final Campaign", the seventh and final leg of the thrash metal legends farewell world tour, which will take place in November. This last hurrah will start at the ExploreAsheville Arena in Asheville, North Carolina, and see SLAYER taking its goodbye bow at the Los Angeles Forum on November 30. Accompanying SLAYER for this last ride are PRIMUS, MINISTRY and PHILIP H. ANSELMO & THE ILLEGALS performing a vulgar display of PANTERA, who will support on all dates.

Discussing what SLAYER means to him personally, Anselmo said: "God, I could talk for hours about SLAYER. I think the world of SLAYER. [They're] very unique.

"I remember when I was younger, there was always this saying that nobody — nobody — plays with SLAYER," he continued. "Whether you are opening or closing, SLAYER was the band that everybody was terrified of. Opening bands would get shit thrown at 'em and stuff. [The crowd would chant] 'SLAYER! SLAYER!'

"All of that energy, that attitude — great attitude; fucking awesome attitude — it's in me. Definitely SLAYER spoke to me as a young man. And they still speak to me. When I watched them live — I just watched a set of theirs earlier this year — they're fucking great, man. And the setlist that they're playing is amazing. So it takes me through great memories of being a young man and just being knocked out by this fucking band."

On the topic of SLAYER calling it quits after one final tour, Anselmo said: "For me, I know they say, 'Oh, this is the end.' I don't think you can walk away from SLAYER forever, man.

"The fact that they end — I say, what more could they do? But also I think that it leaves a new chapter open for them to where if they wanted to come back and do one show a year, one show every two years, it would be fucking huge. So, hey, more power to SLAYER."